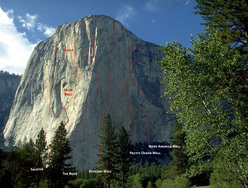 Salathé Wall is one of the most famous big wall climbs in the world. Located on El Capitan, it was only the second route to be established on the Big Stone after The Nose, over nine and a half days in September 1961 by Royal Robbins, Chuck Pratt, Tom Frost in a ground-breaking and uncompromising style.

Hailed as the most logical line up the wall, this legendary climb was also the first big wall to be freed on El Cap thanks to Todd Skinner and Paul Piana who swung leads leads over a nine-day period in 1988. Alexander Huber became the first to lead all pitches free in 1995 and in its sixty year history it has remained one of the most sought-after climbs in the valley.

On 26 October 2015 Libby Sauter and Alix Morris set the female speed record on the route, repeating the 35 pitches in 18 hours and 35 minutes. Here’s their story.

The Salathé Wall
First ascent: Royal Robbins, Chuck Pratt, Tom Frost, 1961
Length: 870m (35 pitches)
Grade: 5.13b 8a/8a+
First free ascent: Todd Skinner and Paul Piana swinging leads, 1988 . In June 1995 Alexander Huber became the first to lead all pitches free, adding one offwidth pitch to avoid a  5.13b pitch above the Ear, and a 5.13a variation between E1 Cap Spire and the Block to avoid a wet crux.
One of the all-time monuments to free climbing, the Salathé is perhaps the most logical big wall up El Capitan. Every pitch has its own story to tell and, as always in Yosemite, has its own name. Every pitch is legendary. And marked by good belays. Normally the route is climbed by ascending the first 10 pitches to the Mammoth Terraces to then abseil to the base via the Heart Ledge before continuing the ascent the next day.

30.11.2018
Adam Ondra onsight attempt on the Salathé Wall in Yosemite / VBlog #6
Adam Ondra attempting to onsight the crux pitches of the Salathé Wall up El Capitan in Yosemite, USA. Belayed by Nicolas Favresse in autumn 2018, the Czech climber deals with the Enduro corner and tries his luck on the Headwall.