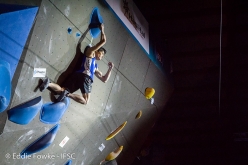 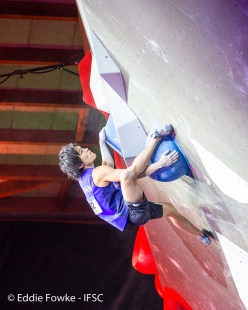 Japanese climber Tomoa Narasaki has made a flash ascent of Decided, an 8B+ boulder problem at Mizugaki in Japan.

What happens when you take the reigning Boulder World Champion and winner of the 2019 Bouldering World Cup out of the training gym for a day and put him on the rock? Mayhem. Something almost never seen before. Enter Tomoa Narasaki, who in Mizugaki in Japan made the first-go flash ascent of Decided, the 8B+ boulder freed by Ryuichi Murai in 2018 that hit the limelight a few days ago when Murai freed the low start create his 8C+ United. Five further moves that Narasaki will surely home in on sooner rather than later.

In the past the 23-year-old has repeated up to 8B+ but never before had he flashed this level of difficulty and it goes without saying that he joins only handful of climbers who have climbed this hard in this impeccable style. Other who have flashed 8B+ include Daniel Woods (Entlinge, Murgtal, Switzerland, 2011) Adam Ondra (Jade, Rocky Mountain National Park, 2015), Jimmy Webb (The Globalist, Finland, 2016), Ned Feehally (Trust Issues, Rocklands, South Africa, 2017) and Jakob Schubert (Catalan Witness the Fitness, Cova de Ocell, Spain 2018.

WOW I FLASHed ”Decided ” V14 which I’ve been willing to climb for long• • Meanwhile a year past from the last time touching wild boulders, I tried with my strong emotion. I instantly felt holdings and beta are somehow friendly to me. Then, I could FLASH it and it’s my best flashing grade record • • Thanks for shooting awesome pics. in a cold @shintaozawa ————————————— ずっとやってみたかった ”Decided ” V14/五段をFLASH• • 1年振りの岩場でしたが、思いきってトライしてみたらすごく自分の得意なホールドと動きで、FLASHする事が出来ました。自己最高FLASHグレードを更新出来て嬉しいです• • 寒い中撮影してくれた @shintaozawa ありがとうございます動画も後程アップします！ ————————————— @au_official @thenorthfacejp #アイディホーム @air_sleeptechnology @unparallelup @frictionlabs

07.05.2019
Janja Garnbret the Great commands in China, with Tomoa Narasaki
The fourth stage of the Bouldering World Cup 2019 took place at Wujiang in China last weekend and was won by Janja Garnbret from Slovenia and Tomoa Narasaki from Japan. Akiyo Noguchi and Kai Horada placed second, Ai Mori and Jakob Schubert third

02.05.2016
Shauna Coxsey and Tomoa Narasaki win Chongqing stage of Bouldering World Cup 2016
The third stage of the Bouldering World Cup 2016 took place in Chongqing, China and was won today by Shauna Coxsey and Tomoa Narasaki. While Narasaki celebrates his first senior victory, this is Coxsey’s third gold in a row this season.