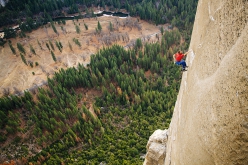 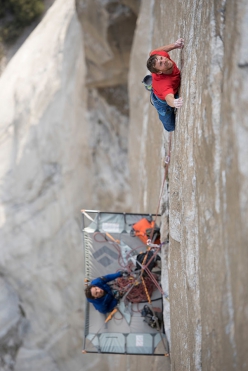 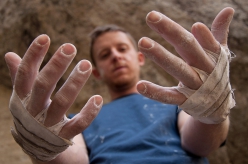 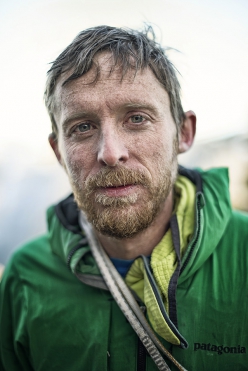 Tommy Caldwell seen after climbing the Dawn Wall during the filming of the movie The Dawn Wall in Yosemite Valley, CA, United States in January, 2015.
Photo by Bligh Gillies / Red Bull Content Pool

American climber Tommy Caldwell is the focus of the fourth episode of the Climbing Sparkling Moments podcast by La Sportiva.

On 14 January 2015, after 19 days on the wall, Tommy Caldwell emerged on the top of El Capitan together with Kevin Jorgeson, after having made the first free ascent of the hardest big wall in the world, the Dawn Wall. His success came after more than seven years of attempts, after having cut his teeth on almost all the other big walls in Yosemite Valley, and after learning the ropes on some of the most difficult sport climbs in the country. And success also came about years after having won the Snowbird climbing comp. At the time Caldwell was a mere 17 and pratically unheard of, but it was this victory that convinced him that his future lay in the vertical sphere. All the details are shared in the fourth episode of La Sportiva's Climbing Sparkling Moments.

The series is available on Spotify, Spreaker, Apple podcasts and on all digital platforms.

04.07.2021
Climbing Sparkling Moments: Bardonecchia and Stefan Glowacz in the first La Sportiva podcast
In the run-up to the Tokyo Olympics, La Sportiva launches Climbing Sparkling Moments, the first weekly storytelling podcast that talks about the game-changer moments of the history of climbing. Episode #1 features the very first international sport climbing competition in Bardonecchia in 1985, and the famous splits carried out by the rising star Stefan Glowacz.

03.03.2006
Linea di Eleganza, Fitz Roy: first repeat and free ascent by Caldwell, Donahue and Roed
Linea di Eleganza, the route first climbed by Elio Orlandi, Horacio Codò and Luca Fava in February 2004 on Fitz Roy, has been repeated for the first time and freed in one single push at 5.12+ by the Americans Tommy Caldwell, Topher Donahue and Erik Roed.
03.11.2005
Caldwell climbs Nose & Freerider in a day!
Just two weeks after Caldwell's astounding repeat of the Nose, the young American has pushed things further by phenomenally climbing both the Nose and Freerider on El Capitan, Yosemite, in under 24 hours!
20.10.2005
Caldwell repeats The Nose!
Yosemite news roundup. On 17 October Tommy Caldwell made a sub-12 hour ascent of the Nose, just days after his free ascent together with wife Beth Rodden. Nicolas Favresse from Belgium makes first ascent of L'Appât on El Capitan (VI 5.12d). Leo Houlding from England onsighted Half Dome's Regular Northwest Face and repeated Freerider.
11.06.2004
Caldwell frees Dihedral Wall
At the end of May Tommy Caldwell freed the Dihedral Wall, on El Capaitan, America. It is is now considered the hardest big wall free climb in Yosemite
23.08.2002
Salathé: Caldwell free climbs Yosemite classic in a day
Tommy Caldwell becomes the first person to free climb the Salathé, Yoesemite, in a day