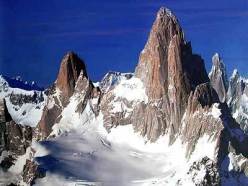 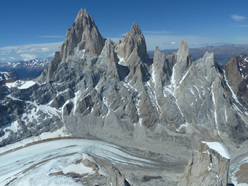 The west face of Fitz Roy
Photo by Marcello Sanguineti

From 12 - 16 February 2014 the Americans Tommy Caldwell and Alex Honnold completed the coveted first traverse of the major ridge line of Fitz Roy in Patagonia.

"From the lowest of lows: Chad Kellogg's recent death on the Supercanaleta, to the highest of highs: the mother of all traverses..." This is how the report begins, posted by Rolando Garibotti this morning, that details the recent achievement of the American climbers carried out by Tommy Caldwell and Alex Honnold who have just carried out the first, enormous traverse of the Fitz Roy ridge line in Patagonia. A traverse, crossed from 12 - 16 February, that encompasses the summits Aguja Guillaumet, Aguja Mermoz, Cerro Fitz Roy, Aguja Poincenot, Aguja Rafael Juárez, Aguja Saint-Exúpery and Aguja de l'S. Put in other words: more than 5 km of ridge line, almost 4000 meters of vertical gain, difficulties up to 7a (5.11d) C1 65°, and 4 bivies.

Interesting detail: for almost all the ascent the duo climbed in approach shoes, except for the Goretta Pillar up the N Face of Aguja Poincenot which was breached in climbing shoes. Much was simul-climbed to retain speed, and the 20-pitch section up Pilar Goretta was dispatched in a mere three pitches. Furthermore, as Garibotti underlines, "It should be noted that their success was in spite of very bad conditions, with much ice and snow in the cracks and on the ridges courtesy of one of the wettest summer seasons in many years."

It's clear that we will endeavor to find out more about this ascent as soon as possible. It's worth remembering that Caldwell has made numerous climbs in the Patagonian region - including above all the first free ascent and first onsight of Linea de Eleganza up Fitz Roy in 2006, established by Elio Orlandi, Horacio Codò and Luca Fava in 2004. What remains to be said is that this is practically Honnold's first route in Patagonia. A truly impressive baptism of fire, for which Garibotti states clearly: "Respect, respect and more respect."