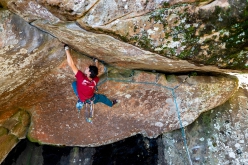 About 15 years ago a friend showed me this giant boulder with an amazing line running diagonally across its roof. At the time I was just a boulderer and had no trad climbing experience, and so we decided to leave it bolt free, saving it for the future.

Five or six years ago I went back with some cams to try it, but the line is so overhanging and intimidating that at the time I failed to abseil down all of it. I now have far more experience on this type of routes and, after several days of cleaning the line and testing the moves and falls, last October I finally freed the route, placing all the gear on lead.

Trad climbs don’t tend to be so overhanging, especially not cracks such as on the second part of this route. Placing Friends is hard work and I had to fire the crux without the comfort of that last piece of gear, which I had to place a bit higher up..

The route is half crack, half sandstone boulder. It is certainly a lot scarier than a crack climb, but it is still quite safe thanks to the bomber gear below the roof. It's that perfect mix I've been looking for for a long time, I just didn't realise it was so close to home.

As for the grade, I reckon it’s in the region of 8a, or something like E7 6c on the British trad grading system.

31.03.2017
Michele Caminati and the shocking ground fall video
The video of Italian climber Michele Caminati falling to the ground when his rope broke at the gritstone crag Curbar in England. Caminati miraculously walked away with only a broken wrist and heel.

30.03.2017
Michele Caminati survives gritstone ground-fall in England
Michele Caminati, an expert of England’s gritstone, fell to the ground while climbing The Elder Statesman at Curbar in the Peak District. Miraculously, the Italian walked away with nothing more than a fractured wrist and heel.

25.12.2013
James Pearson repeats Is not always Pasqua at Interprete, Italy
At the Italian crag Collina di Interprete James Pearson has made the first ground-up repeat of Is not always Pasqua, the E9 trad climb freed in 2002 by Mauro Calibani and repeated only by Cristian Brenna. Furthermore, two days previously the British rock climber freed a route at the same crag of similar difficulty.

15.04.2013
Michele Caminati dodges rain and snow in search of sun on England's gritstone
The report by Michele Caminati about yet another trip to England to climb some of the famous gritstone trad routes and boulder problems. 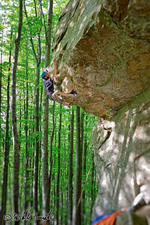 09.03.2012
Michele Caminati, boulders hard at Burbage in England
At Burbage North on England's gritstone Michele Caminati has sent the boulder problems The Voyager 8B, The Promise (7B+) and the route Three Blind Mice E7 6c.