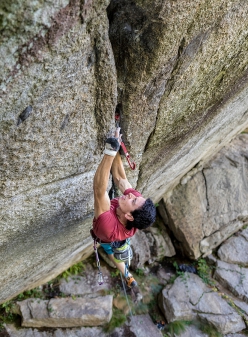 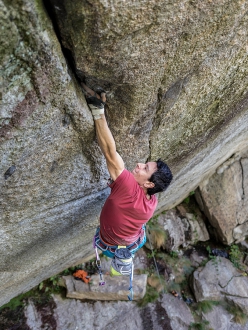 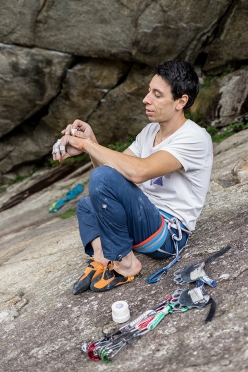 Michele Caminati taping up prior to repeating Greenspit in Valle dell'Orco, Italy
Photo by Paolo Seimandi 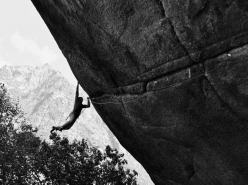 Italian climber Michele Caminati has repeated Greenspit, the difficult trad climb freed in Italy’s Valle Orco by Didier Berthod. The ascent marks a significant comeback after his fall on England’s gritstone in 2017.

I first began trying Greenspit, freed by Didier Berthod in 2005, back in October 2012 during the international trad climbing meeting in the Orco valley. Organised by the Italian Academic Alpine Club, I’d had the honour of being invited despite being little more than a boulderer at the time. One morning I accompanied Pete Whittaker and photographer Andrew Burr to Greenspit to take some photos of the route Pete had repeated the previous year.

I myself tried the route, but the result was fairly disastrous. Actually, back then I was probably much stronger than I am now, but I had no experience at all of crack climbing. I still had plenty to learn before ascending that short crack through the steep roof!

It was then that I decided that I really wanted to find out more, and over the following years I focussed more and more on crack climbing, above all at Cadarese where in a couple of seasons I managed to send all the crag’s most famous lines.

I returned to Greenspit again in 2015/16. Unfortunately though I could only try it for one or two days at a time, and seeing that I lived a long way away, this meant huge sacrifices and lots of time spent in the car. And although I made some progress, the narrow crux section towards the end continued to prove troublesome for my wide hands and, inexorably, I kept failing.

Then in 2017 along came my accident on The Elder Statesman in the Peak District: the enforced rest and the long and painful recovery kept me away from Greenspit for quite some time, also because I subsequently moved to England. I was really worried I’d never send the route because of my wrist: after the break I hadn’t regained full mobility and it wasn’t ideal for the route’s underclings and the crux finger locks.

I moved back to Italy in 2019 and I was overjoyed to see that I was still capable of doing all the moves, despite my poor wrist. Despite now living in Bolzano, about four and a half hours away from Valle dell’Orco, I returned to the route with renewed motivation.

The real breakthrough came last spring, when I happened to meet Matteo Della Bordella and Francesco Deiana who’d both just sent the route. They helped me improve the Friend placements and gave me some better beta for one of the cruxes. I then began placing the gear on lead, by now I felt closer to the send than ever before

This October I decided to take an entire week off and stay up in the valley in order to send Greenspit, and finally last Friday I managed to make my long-term dream come true. This is certainly one of the most iconic routes for crack climbing aficionados!

Placing the gear on lead doesn’t make an incredible difference, but it’s surely the icing on the cake because it is time and energy consuming and increases the chances that something might go wrong. On my lead I actually had to skip a piece of pro towards the top that I usually clip if it’s pre-placed, simply because I couldn’t place it on the redpoint burn.

Many thanks to Paolo Seimandi for his help this week and for the beautiful photos. I now feel happy but almost empty, I’m going to have to search for another project that keeps me as motivated as Greenspit did!

30.03.2017
Michele Caminati survives gritstone ground-fall in England
Michele Caminati, an expert of England’s gritstone, fell to the ground while climbing The Elder Statesman at Curbar in the Peak District. Miraculously, the Italian walked away with nothing more than a fractured wrist and heel.

31.03.2017
Michele Caminati and the shocking ground fall video
The video of Italian climber Michele Caminati falling to the ground when his rope broke at the gritstone crag Curbar in England. Caminati miraculously walked away with only a broken wrist and heel.

28.11.2016
The routes climbing photographers dream of
Separate Reality climbed free solo by Wolfgang Güllich and Heinz Zak, Greenspit in Valle dell’Orco by Didier Berthod and Fred Moix. Maurizio Oviglia takes a closer look at the link between photographers and the climbs they have photographed.

19.09.2017
Greenspit, Fred Moix climbing The Warrior's Roof in Valle dell'Orco
The short film The Warrior’s Roof by Christophe Margot retracing the first ascent of Greenspit in Valle dell’Orco, Italy at the hands of Didier Berthod and documenting the October 2016 repeat by Fred Moix.

31.08.2009
Valle del Orco, Greenspit repeats and new route flurry
At the start of August a strong British team travelled to Italy's Valle del Orco where they managed to carry out the third ascent of Greenspit and forge five new routes high above the valley floor.

15.04.2013
Michele Caminati dodges rain and snow in search of sun on England's gritstone
The report by Michele Caminati about yet another trip to England to climb some of the famous gritstone trad routes and boulder problems.