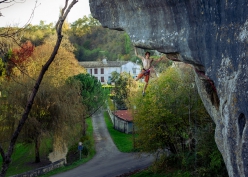 French climber Seb Bouin has made a rare ascent of Hugh at Les Eaux Claires, first ascended in 1993 by Fred Rouhling and famous for being the first 9a in France.

As part of his Vintage Rock Tour to climb the hardest routes in France of the 80’s and 90’s, sooner or later Sébastien Bouin had to stop off at Les Eaux Claires and try Hugh, the violent series of pockets linked in 1993 by Fred Rouhling and famous for being the first 9a in France.

The 20m route is comprised of a first roof graded 7C+/8A boulder, a spectacular coordination dyno, a second Font 8A crux from a rounded one finger pocket and then a final roof which still requires utmost concentration. It was first repeated in 2001 by Alessandro Lamberti, then in 2002 by Pierre Bollinger and Daï Koyamada and in 2010 by Stevie Haston, after which the line received little if any attention. It is likely that there have been other repeats we are unaware of, but the route has achieved almost legendary status and is described by the 27-year-old as having "Big impressive moves on big holds. What a special route, a special place, and a special moment."

Talking about special routes: Bouin attempted two other Rouhling testpieces, De l'autre côté du ciel 9a at Eaux Claires and Akira 9b at Grotte de Vilhonneur, but for the time being rain and difficulties stopped play. Here’s Rouhling reclimbing his Hugh in 2010.