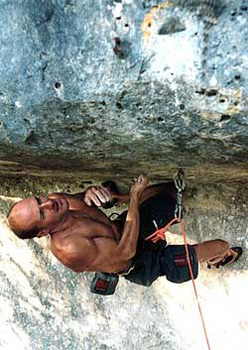 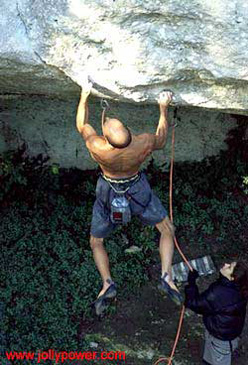 Lamberti first tried the route throughout August but, although able to link the moves, the hard start eluded him. He returned home and, once the “Thailand-like temperatures” had dropped, made the 1500 km journey back north. After a 16-hour journey he attempted the tricky start again and stuck it first go! Not feeling up to trying the entire route he decided to leave it for the next day, but then failed. After falling off the last move on Friday he had to dig deep to find the right motivation for a final attempt - on Saturday, just before his return to Rome, all moves fell into place. Alessandro sent us the following:

OBJECTIVE 9a by Alessandro Lamberti
I’m 37 and the idea of climbing a 9a wasn’t connected to reaching a final goal. It represented my desire to continue wanting things, the objective was to continue having objectives. I just didn’t want to stop.

The problem was finding one which was reliable. It would have been too easy and not sportsmanlike to establish one at home. In no other sport can an athlete define his own performance as something outstanding: it’s as if a skier sets the course according to his own needs before the race.

In April the magazine "Grimper" published a long interview with Hirayama who had just returned from a trip to Charente where he tried Fred Roulling’s routes. Yuji said about ‘Hugh’: "It’s hard, harder than all the other 8c+ I’ve tried."

Hugh divided by 4
The first roof. Five moves lead to a reach-through from two sloping edges, either footless or with a really high Egyptian. I chose to do it footless and for the first 10 days failed because it was too hot. I reckon this is the hardest section, about 8a boulder

The dyno. The move that made the route famous, because it’s spectacular: a complete cut-loose dyno to a hold about two meters higher. It’s difficult mentally and requires good coordination, but easy compared to the previous move. I reckon 7a+ boulder.

The dyno from the monodoigt. The other hard move: dyno from a left-foot smear and first joint rounded monodoigt to a rounded hold. 8a boulder.

The final roof. Eight easy moves compared to the rest of the route, but you’re very tired at this point. I told myself that it was impossible to fall from these last moves. This wasn’t the case.