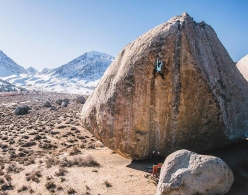 The nectar of the Gods was fully savored the other day by 26-year old American climber Nina Williams, who sent one of the most coveted highballs not only in the Buttermilks Bishop area, but worldwide. The problem Williams headpointed is Ambrosia, almost 15 meters of climbing up to V11/8A protected by crashpads only and first explored in 2009 by Kevin Jorgeson. So far the line has been repeated by only a handful of very strong climbers, including the likes of Alex Honnold, Isaac Caldiero, Enzo Oddo, Jorg Verhoeven and, more recently, Gabriele Moroni. Williams’ ascent is remarkable for two reasons: it is an extremely rare repeat and, at the same time, the first female ascent of this stunning physical and psychological testpiece.

The problem is located on the most important boulder at Buttermilks, the so-called Grandpa Peabody, where in 2015 on her first visit to the area Williams highballed her way up Footprints (7C). The following year she climbed the highball Evilution Direct (V11, 8A) and in order to complete what she has described as the "king line trifecta" on the Grandpa Peabody in late February she decided to raise the stakes and concentrate on Ambrosia.

A series of micro crimps at the start lead to the hueco - the characteristic pocket - circa 7m off the deck where the V11, 8A technical difficulties end and the psychological demands begin. Williams rehearsed the moves on toprope, concentrating in particular on the upper section where falling off is no longer an option. Then, on a clear sunny day and with the surrounding mountains sprinkled in a fine layer of snow, the climber of Rhode Island climbed her way to the top to savour the nectar which, according to Greek mythology, confers immortality and eternal youth.

Ambrosia isn’t Williams’ most difficult boulder problem; after a series of 8A+, in 2014 she repeated Ray of Light (8B) at Rocklands in South Africa, her hardest to date. But when it comes to highball bouldering, Ambrosia is certainly in a league of its own and considered one of the most irresistible temptations of all. So after the historic first female 9a+ carried out by America’s Margo Hayes at the end of February, March begins with another great day for climbing.