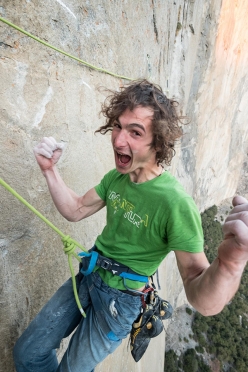 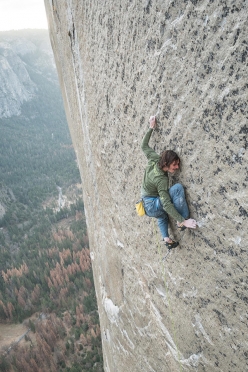 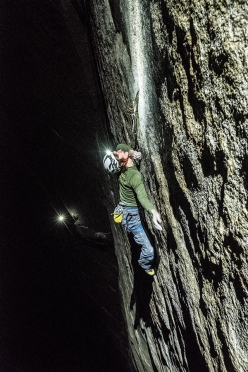 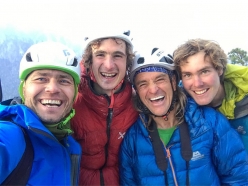 Pavel Blažek, Adam Ondra, Heinz Zak and Christian Wild on the summit of El Capitan on 21/11/2016
Photo by Pavel Blažek

Adam Ondra from the Czech Republic, climbing together with Pavel Blažek, has completed the second free ascent of Dawn Wall on El Capitan in Yosemite. Considered the hardest big wall in the world, this climb was freed by Tommy Caldwell and Kevin Jorgeson between 2014 and 2015.

That's all folks: after 8 days on the wall, yesterday Adam Ondra completed the first free repeat of Dawn Wall on El Capitan, the most difficult big wall climb in the world freed by America’s Tommy Caldwell and Kevin Jorgeson between 27 December 2014 and 14 January 2015 after they had invested the previous seven years exploring its 32 pitches.

Ondra arrived in Yosemite valley for the first time in his life in mid-October and almost immediately set to work on this immense challenge. He received information about the route’s sequences, and also how to use Friends and jumars, from Caldwell, Jorgeson and another valley expert, Alex Honnold, who in doing so displayed great sportsmanship. Ondra then began attempting the pitches together with his climbing partner Pavel Blažek. Climbing predominantly at night he concentrated his efforts on the central section of the route which, with two 9a pitches and one graded 8c+, constitutes the technical crux of the entire climb. The duo checked-out the upper section only once, blazing to the summit before hauling 40kg of food, water and gear to the portaledge at half-height. Ondra was now poised for his ground-up, single push to the summit.

The two set off on Monday 14 November at 2:46 in the morning and yesterday afternoon, on Monday 21 November, they reached the summit having free climbed all its 32 pitches in the process. Time will be needed for an in-depth analysis, but what we know for certain is that the 23-year-old found Dawn Wall to be far more difficult than he had initially expected. Not only the three crux pitches - "without having the beta, some of the sections look just impossible" he stated earlier - but also the lower section of the climb that turned out to be both technically tricky and psychologically demanding.

During his final push Ondra encountered unexpected difficulties on pitch 14 which, despite seven attempts, refused to be climbed free forcing Ondra to wait another nerve–racking day while the rock cooled down and better friction arrived. A masterclass in climbing then enabled him to redpoint the infamous 14th pitch and also the 15th, both graded 9a, after which he justifiably felt "on cloud nine". The next day Ondra breached the final hurdle that barred his way to summit glory, namely the 16th pitch, opting for the version chosen in January 2015 by Tommy Caldwell, i.e. the Loop Pitch. Ondra continued on to the Wino Tower and although only eleven pitches remained to be climbed, due to uncertain weather forecast the duo decided to take a rest. Yesterday the clouds slowly dissipated and without any particular difficulties they reached the summit.

All that remains for Ondra and Blažek to do, once they descend back to the valley floor together with the photographers Heinz Zak and Christian Wild, is to climb back up the face and remove the portaledge and gear. What will remain impressed in everyone’s minds is this great battle fought to perfection by Ondra who, after having reached the absolute maximum in sport climbing (redpoints up to 9b+ and onsights up to 9a), after having bouldered up to 8C+ (until only a few days ago the absolute maximum in bouldering), can now add the most difficult big wall in the world to this list. Dawn Wall, climbed free in just 8 days. Truly impressive credentials to say the least.

20.11.2016
Adam Ondra continues his victory march on Dawn Wall
Further progress on Dawn Wall for Adam Ondra who free climbed the entire crux section yesterday and continued on to the Wino Tower. 11 relatively easy pitches still need to be climbed to complete the first repeat of this route on El Capitan in Yosemite, considered the hardest big wall in the world.

19.11.2016
Dawn Wall: Adam Ondra on cloud nine on El Capitan
After yesterday’s difficulties, Adam Ondra has now managed to free climb the 14th and 15th pitch on Dawn Wall, both graded 9a.

18.11.2016
Adam Ondra encounters first real difficulties on Dawn Wall, El Capitan, Yosemite
On his fourth day of climbing Adam Ondra has hit the first hurdle on Dawn Wall: after 7 attempts he failed to free climb the 14th pitch. Graded 9a, this is considered the most difficult up this big wall freed by Tommy Caldwell and Kevin Jorgeson on El Capitan, Yosemite between 2014/2015.

15.11.2016
Adam Ondra starts 'final push' on Dawn Wall in Yosemite
Adam Ondra from the Czech Republic has begun his single push ground up attempt to free climb the Dawn Wall, freed after 19 days by Tommy Caldwell and Kevin Jorgeson in 2014/2015.