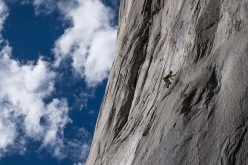 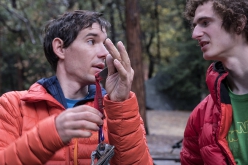 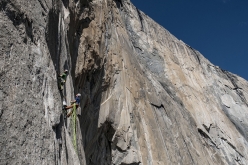 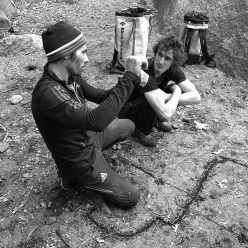 Update about Adam Ondra and his recent progress on the 'Dawn Wall', the immensely difficult big wall on El Capitan in Yosemite, USA, freed by Tommy Caldwell and Kevin Jorgeson in 2014/2015.

As reported previously, Czech climber Adam Ondra is currently in the USA on his first trip to Yosemite Valley where he has decided to jump in at the deep end and try one of the most difficult prizes of all, Dawn Wall on El Capitan, freed over 19 days in December 2014 and January 2015 by Tommy Caldwell and Kevin Jorgeson.

On his third day on the Dawn Wall Ondra managed to fix lines almost to the top of pitch 16, the famous dyno pitch, and he also checked out the the moves on the crux pitches that looked "definitely hard". Reaching this highpoint has been no mean task, and Ondra has dealt with some pitches he has described as "not only bold, but freaking hard too! Definitely no easy grades for these ones - Tommy and Kevin are tough guys."

Ondra has described the route as a "beautiful, HARD, intimidating and motivating project. Tommy Caldwell was a huge visionary to see this line in the middle of the blank wall." Commenting about his tactics, the 23-year-old stated "The goal right now is only to go ground-up to the top, free-climbing and using a little bit of aid c limbing, to fix the whole line with ropes and start working on the pitches properly to have them ready for the final free push later. So if the crux is around the protection, I just touch the holds to see how the sequence would be and continue. The first crux-pitch looked definitely super hard to free climb. Almost impossible. I will have to take a look at all these razorblades more closely."

Ondra has now retreated back to the valley floor and before making a second push up Dawn Wall he has his sights set on most evident line in the entire valley, The Nose. First ascended over 47 days in 1957 and 1958 by Warren Harding, Wayne Merry and George Whitmore, this monumental line was freed in 1993 by Lynn Hill . In what is hailed as one of the most significant free climbing achievements ever, Hill subsequently upped the ante and climbed The Nose free in under 24 hours in 1994.