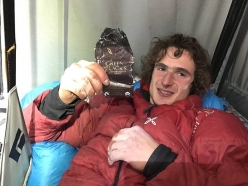 Adam Ondra eating the chocolate Heinz Zak gave to him on the second day of his push up Dawn Wall, El Capitan, Yosemite on 14/11/2016
Photo by Pavel Blažek 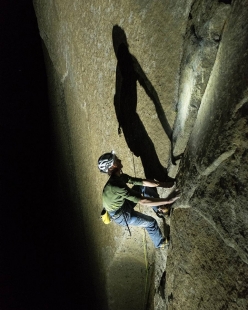 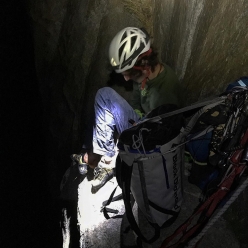 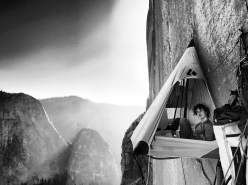 Adam Ondra from the Czech Republic has begun his single push ground up attempt to free climb the Dawn Wall, freed after 19 days by Tommy Caldwell and Kevin Jorgeson in 2014/2015.

UPDATE 16/11/2016
DAY 2:
Update from Adam Ondra on the Dawn Wall: On his second day Ondra managed to free climb a further 4 pitches to reach the start of the crux pitches. The Czech climber recounted "Tired but relieved face! Made it up to the start of pitch 14! As Alex Honnold brought some dark chocolate for Tommy Caldwell and Kevin Jorgeson on their push and it seemed it helped them, Heinz Zak did the same today. But he told me that I must deserve it first:-) And send pitch 10. I did in rather dramatic way on my 2nd go. Then, I almost finished the chocolate while having a few heartbreaking goes on the pitch 12 to calm my nerves. Luckily it all worked out and we are getting deserved sleep."

Adam Ondra has begun in earnest. Yesterday morning the climber from the Czech Republic began his "final push", i.e. his ground-up single push attempt at the second ascent of Dawn Wall, the world’s most difficult big wall climb freed after 19 days on El Capitan between December 2014 and January 2015 by America’s Tommy Caldwell and Kevin Jorgeson.

As reported previously, the 23-year old began working the route in mid-October finding the pitches - as he himself admitted on various occasions - significantly more difficult than he had originally imagined. Both in the lower section of the route, where the climbing has proven to be at times runout and psychologically demanding, and also in the central crux section which offers extremely technical and delicate climbing graded 9a. Caldwell e Jorgeson required years to figure these sections out and the other day Ondra stated frankly "Without having the beta, some of the sections look just impossible."

Climbing together with Pavel Blažek, Ondra forged his way up to the summit of El Capitan once in order to check out the upper pitches and then, after having hauled 40kg of gear, food and water to their portaledge and after having rested for a few days, yesterday morning at 2:46 am the duo set off for the first serious push.

Unsurprisingly, Ondra made short work of the first section: climbing mainly in the dark, he dispatched the first seven pitches before 7:00 am and only the 8th pitch (5.13d) required a second attempt before being climbed free. After six hours of climbing Ondra had dealt with the first 9 pitches and they then stopped due to the heat.

Currently Ondra and Blažek (who is following by jumar) are resting for 28 hours, waiting for the right conditions that arrive when the big stone cools down at night. The next 4 pitches are on the agenda and these lead straight to the three crux pitches of the route.

First day, good day. 9 pitches in the bag after 6 hours of climbing. Conditions were not the best, but I could still reach the goal of the day. Now hopefully we will survive the heat on the portaledge and take a 28 hours of rest untill we continue tomorrow, starting with pitch 10. @blackdiamond #Montura @mytendon @lasportivagram #elcapitan #yosemite #dawnwall