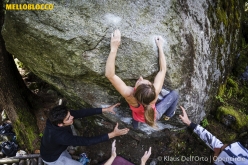 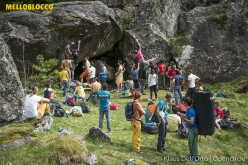 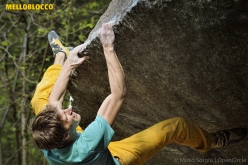 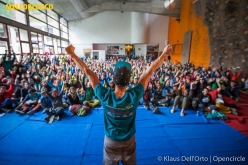 Melloblocco 2017 seen through the eyes of Maurizio Panseri. After having climbed in Val Masino and Val di Mello for 30 years, the Italian alpinist now took part in this, his first-ever, grand bouldering meeting.

I’ve climbed in Val di Mello for more than thirty years and during this period I’ve repeated countless climbs up the valley's huge granite walls. After descending from the routes, I sometimes attempted some of the historical boulders problems located on lush green meadow on the other side of the river. Obviously without a crashpad and, as far as I'm concerned, with pretty oor results. The game, as far as I saw it, was always sharing a rope with a friend in order to spend the day up high, admiring the valley as it slowly but surely got smaller and smaller.

I would never have thought of traveling to the valley just for the sake of bouldering and consequently leave my ropes, harness, nuts and friends at home. I’d never have imagined having so much fun and not feeling nostalgic about the lack of void and silence I search for when climbing multi-pitch routes. So at this point I’d like to thank those who convinced me to have a go at this game and enjoy the beauty of this valley from a different point of view, not just from above but also from down below.

The rules of the game obviously change, all you need here is a bit of chalk, some climbing shoes and a crashpad. You can climb completely alone, in pairs or in big groups, that special bond that's created when you tie into the same rope isn't needed, everything becomes more fluid and flexible. If you reach a problem on you own, seconds later you’re trying the moves with a group of people you’ve never seen before as they suggest the beta and carefully spot you. You start climbing with just one friend, moving and repositioning the crashpad after each move, then all of a sudden the ground is littered with a multicolored bed of mattresses. Slowly but surely some climbers manage to send the problems, some come and go, others offer advice while someone else brushes the holds. And of course some watch and rest while others bask in the sun on the meadow next to the stream, close to the children who run around and play carefree.

There are groups and groups of climbers, many are extremely young, and then there are families, top climbers and absolute beginners. Everyone finds their own dimension, their personal problem to play with, the line they want to climb, however easy or difficult this happens to be. And then you chance across a youngster climbing barefoot with such remarkable ease that the moves seem simple; but when you touch the holds that appeared so generous you realise you’d just witnessed an martian climb.

The most amazing thing of all though is that during this 14th Melloblocco there are nearly 2500 participants, to which one needs to add those who come to climb on their own accord, those who travel up here to see what it’s all about, to simply have a walk or enjoy the party. People come from all over Italy and from across half of Europe, the languages ​​mingle and blend at the base of the problems surrounded by the breathtaking nature of one of the most beautiful alpine valleys of all. D’you have any idea what it means to have 2500 climbers all in the same place at the same time? It’s spectacular! But if you’re after some peace and quiet, don't worry, all you need to do is get off the beaten track and you’ll soon bump into a boulder problem just for you.

As I watch all this taking place I like to believe that everyone is claiming a small part of their own individuality as they search for their problem, seek the right balance to succeed up those moves and send a problem at the limit of their possibilities. I like to think that for everyone out there this takes on a particular and intimate value, thanks to the collective dimension of this great open air celebration. Everyone can satisfy their desire and need for freedom in nature but, unlike on a rock climb, without all the gear needed for safety. If you make a mistake here, or if you’re pumped, coloured mattresses at the base cushion your fall and all you need to do is rest a bit before trying again.

In this game, your choices and decisions don’t affect the others in any way whatsoever. When you stand beneath a problem with a group of people you wait for your turn, and everyone is keen to let the others try as they wish, in a positive mood marked by trust, even among those who don’t know each other but, in that moment, share the same interest and solidarity. Who knows what Zygmunt Bauman would have thought had he been to Melloblocco, just once. Perhaps his collection of texts "Individually, Together" might even have included something about this meeting and the unique social phenomenon it represents. Melloblocco, too, is the art of living together.

01.02.2017
Melloblocco is forever, 2017 to go ahead as usual
From Thursday 11 to Sunday 14 May 2017 Italy’s Val Masino - Val di Mello will host the 14th edition of Melloblocco, the world’s biggest international climbing and bouldering meeting. Just like every year the event will be organised by Associazione Operatori Val Masino.

08.05.2016
Melloblocco 2016 final day - the need to climb
The 13th edition of Melloblocco, the world's biggest bouldering and climbing meeting, came to a close today in Val Masino - Val di Mello, Italy. 2800 registered climbers underline the success of the event which has no other equals in the climbing world.

03.05.2015
Melloblocco 2015 - day 4, the grand finale and free bouldering spirit
The 12th edition of Melloblocco drew to a close today in Val Masino and Val di Mello, Italy. This is the biggest climbing and bouldering meeting in the world and confirmation came from the 2,500 registered participants representing 25 nations, the 5,000+ climbers and also the unique nature of the event that unites their irrepressible love for climbing with the beauty of these valleys.

04.05.2014
Melloblocco 2014 - day four, a final of climbing and beauty
The 11th Melloblocco came to an end today; once again the international bouldering meeting proved to be the biggest event of its kind worldwide, with 2600 registered climbers and more than 4000 people in Val Masino and Val di Mello

05.05.2013
Melloblocco 2013: day ten, goodbye to the Valley
5/05/2013. The last day of the 10th Melloblocco. 10 days of climbing and bouldering to reaffirm the indissoluble bond between Val Masino - Val di Mello and the Melloblockers. All 2,000 climbers have promised to return next year.

07.05.2012
Melloblocco, a passionate battle
Sun, rain, boulder problems and parties for 2200 people during the ninth edition of Melloblocco 2012. Our final report of the world's most important bouldering meeting which took place in Val Masino - Val di Mello from 3 to 6 May.
08.05.2006
Melloblocco 2006, all the stories from the Val di Mello
Stories, facts and adventures directly from the third edition of the Melloblocco, the largest international bouldering meeting which took place in Valle di Mello on 6 - 7 May, organised by the Lombardy Mountain Guides. Special gallery by Giulio Malfer.

09.05.2005
A thousand and one Mellobloccos
The Melloblocco international bouldering meeting organised in Valle di Mello by the Lombardy Mountain Guides took place from 7-8/05/05.

11.05.2004
Melloblocco: a great success!
On Saturday 8 and Sunday 9 May, over 300 boulderers met up in the Italian Val di Mello and took part in the two-day international Bouldering event, organised by the Lombardy Mountain Guides.