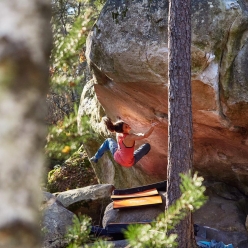 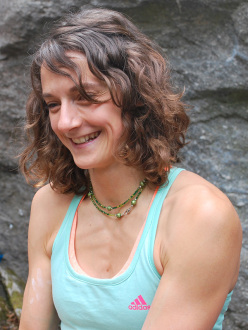 With her recent ascent of Mécanique élémentaire, French climber Mélissa Le Nevé has become the first woman to climb an 8B+ boulder problem at Fontainebleau in France.

Just three months after climbing her first 8B boulder problem, 27-year-old Mélissa Le Nevé has now raised the bar and climbed her first 8B+. The Frenchwoman sent Mécanique élémentaire, a sequence of 16 moves freed by Sébastien Frigault at Recloses in Fontainebleau on the outskirts of Paris.

Apart from being Le Nevé’s best performance on rock so far, Mécanique élémentaire checks in as the most difficult boulder problem sent by a woman in the birthplace of modern bouldering. Female 8B at Font was first achieved fifteen years ago, in 2002 when Catherine Miquel directed her way up Trafic, and this extraordinary feat was only equalled in December 2016 when Le Nevé sent La cicatrice de l’Ohm.

In 2015 Le Nevé became "une vraie bleausarde" when she completed the first female ascent of the famous "Big Five" circuit at Cuvier Rempart, comprised of the problems Big Boss, 7C, Tristesse, 7C, Big Golden, 7C+, Fourmis Rouge, 7C and Atresie 8A. In 2014 Le Nevé made the first female ascent of Wallstreet, the world’s first 8c sport climb established by Wolfgang Güllich in 1987 in the Frankenjura, Germany.