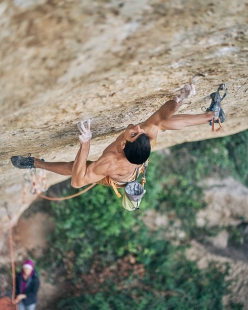 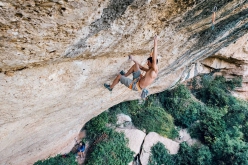 PORTFOLIO / gallery Portfolio: Jorge Díaz-Rullo chills out on Cafe Solo 9b at Margalef

Jorge Díaz-Rullo chills out on Cafe Solo 9b at Margalef

Spanish rock climber Jorge Díaz-Rullo has made the first ascent of Cafe Solo, a 9b sport climb at Margalef.

Over the last 15 years Margalef has slowly but surely transformed into one of the world's absolute reference points for cutting-edge sport climbing. The huge crag that hosts gems such as the Perfecto Mundo 9b+ (Alexander Megos 2018), First Round First Minute 9b (Chris Sharma, 2011) and Demencia Senil 9a+ (Chris Sharma, 2009) is now home to another 9b that dices its way up a never-ending series of violent one and two finger pockets.

The new route has been put up by young Jorge Díaz-Rullo who, after having repeated FRFM in March and after his 8c free solo of Darwin Dixit in April, threw himself headlong onto the line located in the famous Racó de la Finestra sector. Bolted by Anghelo Bernal Quintero, the route is called Café Colombia and, although all moves are feasible, is currently a sought-after project.

Café Colombia is split by a "rest" at a tiny break and while the original line continues straight up thought a bouldery crux, Díaz-Rullo has now avoided this by trending left and finishing up the neighbouring route. The new variation is called Cafe Solo and is graded a whopping 9b, but as Diaz-Rullo explains "But is not time for celebration, I need more work for my real project." Café Colombia remains the main challenge.