British rock climber James Taylor has made the first ascent of Prisoners of the Sun, an impressively difficult and dangerous E10 7a trad climb at Rhoscolyn on Holy Island, Anglesey, Wales.

Holy Island on the west coast of Anglesey in North Wales is home to some of the most famous and also fearsome trad climbs in the whole of Britain, its cliffs the stern testing ground for generations of British trad climbers ever since the early 1960’s. The names of routes like A Dream of White Horses, The Strand, Hunger, The Cad and the The Bells The Bells on the massive sea cliffs at Gogarth are enough to make any trad climber’s heart flutter, and James Taylor has now taken difficulties on this tiny isle into a different realm altogether with his first ascent of Prisoners of the Sun at the crag Painted Wall close to Rhoscolyn.

The 28-year-old, who previously climbed E9 and 8c and makes climbing holds for a living, believes the new line warrants E10 7a, making it one of the hardest and most serious trad climbs in the country. The climbing itself checks in at French 8b, but instead of bolts the route accepts only poor protection and sports a bold lower wall with ground-fall potential from the crux. Taylor freed the route on his third lead attempt after 3 years of both physical and psychological preparation.

Writing on his Instagram account, Taylor explained "I fell after getting the gear in on my first 2 attempts but a fall from the lower wall wouldn't be pretty. On the lower wall there is a nasty ground fall on the cards off a 7a move after a long string of 6c, its thin, technical and very powerful climbing on a 20° overhang, not sure i could have psyched myself up to lead many more times."   He concluded "This route is at my limit both mentally and physically and took me countless sessions before I could even top rope it, what a journey!"

24.07.2009
Gogarth rock climbing in Wales
Rock climbing on Gogarth in Wales, one of the best sea cliffs in Britain. 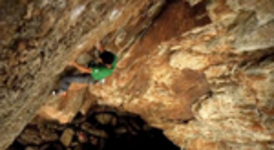