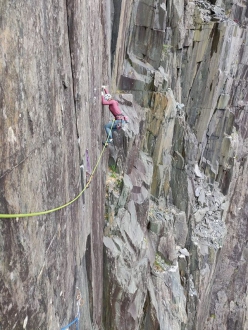 Britain’s Hazel Findlay has repeated one of the most famous multi-pitch rock climbs in Great Britain, The Quarryman in the Twll Mawr slate quarry above the village of Llanberris in North Wales. First ascended by Johnny Dawes in 1986 during the early slate climbing revolution, the four-pitch outing shot to fame thanks in part to the cult climbing film Stone Monkey in which Dawes masters his way up the uniquely smooth Groove pitch. Over the last 34 years the line has been repeated by only a handful of other climbers, including France’s Caroline Ciavaldini who made the first female ascent in 2018.

Findlay worked the route with climbing partner Angus Kille who repeated the line in mid-June, and made a no falls ascent herself today. In 2011 she became the first British woman to climb the dangerous trad grade E9, while in 2014 she was the first British woman to climb 8c. Last November she repeated Magic Line, one of the most difficult trad climbs in Yosemite Valley, where in the past she has repeated the likes of Golden Gate, Pre-Muir, Freerider and Salathé Wall. Although far smaller in size than these El Capitan big walls, The Quarryman is nevertheless and important tick in her impressive climbing curriculum.

05.07.2011
The Quarryman and Strawberries - important repeats in Wales
Jorg Verhoeven has made the second on-sight of Strawberries E6 at Tremadog while Steve Mcclure has carried out the first one-day ascent of The Quarryman E8 in the Dinorwig slate quarries.