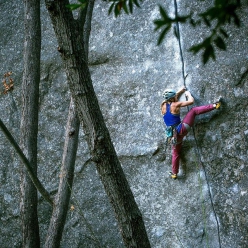 Hazel Findlay climbing Magic Line in Yosemite. The climb was first ascended by Ron Kauk in 196 with pre-placed gear, and climbed without pre-placed gear for the first time by his son Lonnie Kauk in 2018
Photo by Jacopo Larcher

British rock climber Hazel Findlay has repeated Magic Line, one of the most difficult trad climbs in Yosemite Valley and beyond.

Hazel Findlay has repeated Magic Line, the splendid thin crack climb located at the base of the Vernal Falls in Yosemite, first climbed in 1996 by true valley legend Ron Kauk. At the time the Stonemaster climbed the crack with pre-placed gear. In 2016 his son Lonnie Kauk made the route’s second ascent and then in November 2018 he took things to their logical conclusion and climbed the route placing all the gear on lead. Graded 5.14c, Magic Line is reputed to be one of the most difficult crack climbs of all, not only in Yosemite Valley.

Findlay first attempted the route last year and immediately realised that it was not only extremely difficult, but also extremely beautiful. She stated "I knew as soon as I tried it very briefly in November 2018 that if I was ever going to climb one very hard (for me) single pitch this would be it. Just because it was so beautiful to look at, so fun to move upwards on and in such a magical place."

Following specific training, this autumn the 30-year-old returned to Yosemite specifically with this route in mind. Ignoring El Capitan therefore, where in the past she has made free ascents of the big walls Golden Gate (2011), Pre-Muir (2012), Freerider (2013) and Salathé Wall (2017) she focused her attention on this pristine crack. After working the moves and falling twice off the last hard move (in the video below she is seen fallingn off the lower crux) she managed to repeat the route. On her last attempt on the last day before returning to Britain. And yes, she too placed all the gear on lead.

Yesterday I got to the last hard move on Magic Line and for half a moment I didn’t climb quite at my best, which was enough to spit me off. All at once I was heartbroken to have missed my chance and also more than excited to have got that far from the ground placing all the gear. At the rest before the final crux I reminded myself that although I didn’t know if I would do it or not, this unknown was not only OK but it was precisely why I was here. I was the only person responsible for what would happen in the next few minutes; it was entirely in my control and yet the outcome completely unknown. I just didn’t know what would happen. But the magic is in the not-knowing. How boring would climbing be if you always knew you were going to do it? - - It felt amazing to finally be at the upper crux on the lead having got through the nails lower crux. Who knows how many burns my finger will let me have before my season here is over but even if I don’t send this year I’m more than psyched to have got this far and know that a route this demanding is possible for me. This video was taken the session before by @babsizangerl Thanks @angus.kille for the belay @blackdiamond @seatosummitgear @lasportivagram