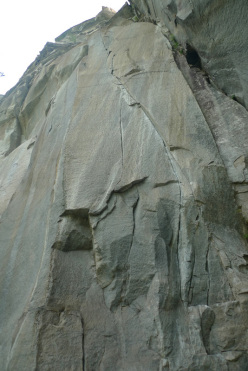 The route line of the famous The Doors, Cadarese, Italy
Photo by Hazel Findlay

English climber Hazel Findlay has visited the Italian crag Cadarese where she repeated, amongst others, the famous route The Doors.

It's likely to be the first female ascent: during a recent trip to Cadarese in Valle Antigorio (Val d'Ossola), British climber climber Hazel Findlay repeated the famous splitter crack The Doors.
The route had shot to fame not so much because of it's beauty or grade (this varys, depending on who repeats it, from 7a+ to 8b) but due to the fact that last year the bolts were removed (an act which caused quite a stir) from the marvellous crack first ascended in 2007 by Fabrizio Fratagnoli and Marco Bassi.

Worth noting is the fast, two-day repeat and Findlay's point of view which casts light onto the British attitude towards trad climbing: "The downfall? The bolts! Having done a philosophy degree I generally like playing devil’s advocate and tend to argue against the staunch British anti-bolting ethic. I don’t mind bolts, I can tolerate them on granite routes, in between cracks and at anchors. I have also been known to argue that in the UK our history of obstinate no-bolts ethic has done a lot to hinder the progression of British climbers. However, all this ‘open-mindedness’ flew out the window when I saw these perfect cracks with a line of bolts next to them. My heart sank and I felt deeply unsettled at the prospect of climbing these beautiful cracks with only quick draws on my harness. Clearly I can’t shake off my British roots after all"

For the record, according to Findlay, The Doors probably deserves not more than 8a+. It's also worth noting that despite the bolts Findlay enjoyed the climbing at Cadarese!


Cadarese (Valle Antigorio) – 50 cracks from 4a onwards, located at an altitude of circa 900m, considered by some to offer the densest concentration of cracks in Central Europe. A mix of sport and trad climbs with equipped belays, a new sector has been developed recently dedicated exclusively to trad. www.ossolaclimbing.org/node/99