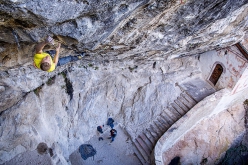 In just five days climbing at Arco, Jakob Schubert sent a series of difficult sport climbs including  'Beginning' 9a/9a + at Eremo di San Paolo and an onsight of the ‘8c '5 Uve’ at Narango.

Jakob Schubert seems to be from another planet when climbing outdoors. In just five days at Arco, Italy, the 29-year-old Austrian climber amassed: Thunder Ribes 9a (according to him 8c+/9a) at Massone, Zauberfee 8c+ at Eremo di San Paolo, the 8c 5 Uve onsight at Narango followed, by Natural Present 8c/8c+ and Mr. Teroldego 8c all on the same day. Furthermore, he made the third ascent of Beginning 9a/9a+ (after Stefano Ghisolfi and Adam Ondra) at Eremo, before onsighting Terra Piatta 8b+ at Pizarra and repeating Zero Tolleranza (8b+/8c) later that day. Omen Nomen 9a at Padaro ended his sending spree, achieved in five days and with one one rest day in between.

A few weeks ago Schubert made the third ascent of Fugu 9a at Austria’s Schleierwasserfall, and it was here that after lockdown he repeated Alexander Huber's famous Weiße Rose 9a. While impressive, one of his best performances to date went by almost unnoticed: a flash ascent at Schleierwasserfall of the classic Lichtjahre. This superb route had been freed back in 1992 by Hannes Rieser and after a hold broke Markus Bendler redpointed the line and upgraded it to 8c+. Alex Megos repeated it on his third attempt recently, while Schubert relied on the beta given to him by Michael Piccolruaz to complete what he has described as "certainly one of my harder flash ascents to date."

26.05.2020
Jakob Schubert - Lockdown to Rock-down climbing in Austria
The video of Jakob Schubert training at home during lockdown in Austria and his subsequent first 10 days climbing outdoors.