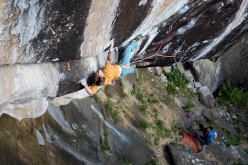 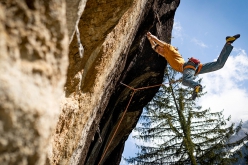 Above the rapid and cold river Ziller Jakob Schubert and Jorg Verhoeven have made the first ascent of two hard sport climbs, putting Austria’s Zillertal back in the limelight once again.

Schubert had established the valley’s first 9a in 2015 with his Companion of Change and now he has linked two existing routes, Hiasline, 8c/+ by Matthias Schießtl and the 8b+ Linke Generation to produce Walk the Line, a 9a that cuts diagonally across the entire front face of Monkey Island. Verhoeven concentrated his post-lockdown efforts on a line projected by local par excellence Gerhard Hörhager at Schwarze Wand. This combines two existing routes to produce Der Weg zur Quelle, Road to the Source, which "weighs in at long and pumpy 8c+" and features an interesting double dyno.

"The new lines are the result of a big of creativity, but one has to say that the link-ups are really worthwhile” explained Verhoeven, who added “in the coming years though there’ll probably be far more high-end routes in the Zillertal. There are lots of projects on the go and the potential is nigh endless at the moment."

My newest addition to the Zillertal valley: ‚Walk the Line‘ [9a]. Such a great day, starting with a ascent of Traumschiff [fb 8b+] then walking up to the crag Monkey Island and doing the FA of this power endurance testpiece which is a diagonal through the whole wall We are working on a little film about my time in quarantine and a few hard ascents I was able to pull off once the restrictions ended, stay tuned! Photo by @alpsolut_pictures #rockclimbing #zillertal #myinnsbruck #firstascent #climbing @mammut_swiss1862 @raiffeisen @innsbrucktourism @lasportivagram @heeressportzentrum @gloryfy @thecrag_worldwide @sporthilfe.at

The Flying Dutchman in action . Apparently I can still do new school double dynos, making the FA of 'Road to the Source' yesterday in the Zillertal! This route travels through most of the 'Schwarze Wand', ending up in the mega classic 'the Source', put up by the maestro @geriroc himself. Thanks for letting me have a play on this project, Geri! • Photos by @michael.piccolruaz @geriroc and @tobias_lanzanasto

09.11.2018
Zillertal bouldering area threatened in Austria
The Zillergrund Wald bouldering area in the Zillertal, Austria, is at risk of closure due to quarrying. The local climbers have launched a petition and are appealing to the climbing community to help safeguard the area’s future.

03.09.2012
A Zillertal climbing holiday at home with Gerhard Hörhager for Mauro Calibani & friends
Mauro Calibani recounts his holiday with family and friends at the home of Gerhard Hörhager, in Austria's Zillertal rock paradise. A step back into climbing history, in the footsteps of great Hörhager and his Graceland 8b and Ganja 8a+ trad, two emblematic testpieces first ascended by this strong climber in the middle of the magnificent (climbing) 80's.