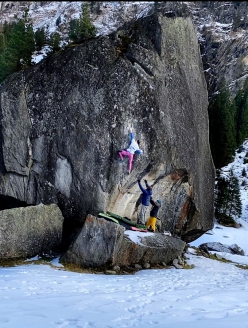 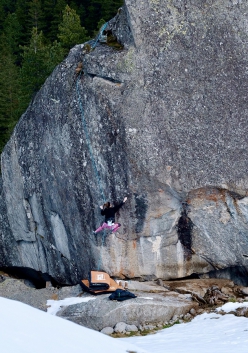 Karoline Sinnhuber toproping the 8A+ highball Knockin' on heavens door in the Zillertal, Austria
Photo by Fabian Leu

Austrian climber Karoline Sinnhuber has climbed Knockin' on heavens door, an 8A+ highball boulder problem in the Zillertal.

Austria’s Karoline Sinnhuber is slowly but surely making a name for hard ascents outdoors. Although the 24-year-old sent her first 8B back in 2015 it is only really now, since her official retirement from the Bouldering World Cup competition circuit at the start of 2019, that she is coming into her own. Sinnhuber confirmed her 8B form with Ray of Light at Rocklands in summer, while just the other day she sent Zillertal’s most obvious highball, Knockin’ on Heaven’s Door.

This 8A+ at Sundergrund was established by Tobias Haller in 2010 who described it as being "one of the purest and uncompromising highballs I have ever done." Sinnhuber first checked it out on toprope in summer 2018, but soon abandoned the project as temperatures were far too high. She returned in autumn that same year but was shut down once again by the crux start. This year she unlocked the intial 3-meter sequence and, keeping her nerve, managed to crimp her way to the top.

09.11.2018
Zillertal bouldering area threatened in Austria
The Zillergrund Wald bouldering area in the Zillertal, Austria, is at risk of closure due to quarrying. The local climbers have launched a petition and are appealing to the climbing community to help safeguard the area’s future.

03.09.2012
A Zillertal climbing holiday at home with Gerhard Hörhager for Mauro Calibani & friends
Mauro Calibani recounts his holiday with family and friends at the home of Gerhard Hörhager, in Austria's Zillertal rock paradise. A step back into climbing history, in the footsteps of great Hörhager and his Graceland 8b and Ganja 8a+ trad, two emblematic testpieces first ascended by this strong climber in the middle of the magnificent (climbing) 80's.