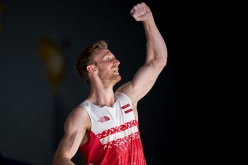 Austrian climber Jakob Schubert has made a swift repeat of Erebor at Eremo di San Paolo close to Arco, Italy. The 9b was put up by Stefano Ghisolfi and previously repeated by Laura Rogora and Adam Ondra.

Jakob Schubert is currently enjoying an absolutely devastating run of form and after having made a clean sweep at the Capella sector in Siurana a few weeks ago with the swift redpoints of King Capella (9b), Furia de Jabali (9a +), La Capella (9a +) and a flash of Jungle Speed ​​(8c+/9a ), the Austrian has now climbed Erebor at Eremo di San Paolo on the outskirts of Arco, Italy.

Established in January 2021 by Stefano Ghisolfi in repeated by Laura Rogora in October and Adam Ondra in November, this 9b was repeated by the 31-year-old after only 4 days of attempts, 2 of which in less than optimal conditions, and after a foothold broke off right at the top.

Schubert once again confirm he’s the climbing machine par excellence, the current reference point when it comes to hard and fast repeats. But after noting this astounding speed, the question surely arises once again: to what extent could he push his boundaries, and those of sport climbing in general, if he found the time to concentrate on his own project and invested say 40 days of effort, instead of just 4?

05.10.2021
Laura Rogora: the 9b/+ Erebor exploit interview
Interview with Laura Rogora after her first repeat of the 9b/+ Erebor at Eremo di San Paolo in Arco, Italy. With her It is the first time that a woman has climbed a route of this difficulty. Watch the uncut video of her ascent today at 16:00.

03.10.2021
Stellar Laura Rogora makes first repeat of 9b/+ Erebor at Arco in Italy
Laura Rogora has made the first repeat of Erebor at the crag Eremo di San Paolo close to Arco. Graded 9b/+ and established by Stefano Ghisolfi in January 2021, it is considered the most difficult sport climb in Italy. This is the first time a woman has climbed a route of this difficulty.