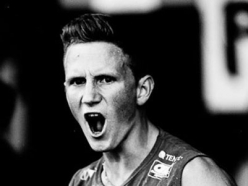 Austrian climber Jakob Schubert has made the third ascent of King Capella 9b at Siurana in Spain. To end his day in style he repeated La Capella nearby, suggesting 9a+.

"Just a normal day at the office ;-)" That’s how Jakob Schubert summed up Friday the 10th of December 2021, which at Siurana in Spain netted him the swift repeats of King Capella and La Capella.

King Capella was established in March 2021 by William Bosi who suggested 9b+, and repeated a fortnight ago by Alexander Megos who didn’t proffer a grade suggestion. Schubert repeated the powerful testpiece on his fourth day of effort and has suggested 9b.

Hungry for more, two hours later he clipped the anchors of La Capella, first ascended a decade ago by Adam Ondra who at the time had suggested 9b. This grade stuck after repeats by the likes of Stefano Ghisolfi (2018), Daniel Woods (2018) and Will Bosi (2020), but the Austrian - who needed a mere five attempts spread out over two days - reckons it felt more like 9a+.

This begs the question: if that’s the result of four days at the "office", who knows what Schubert might achieve after, say, 40?!?

TOPO: Climbing at the crag Siurana in Spain