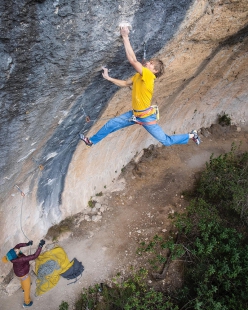 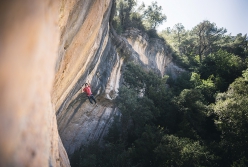 William Bosi making the first ascent of King Capella at Siurana, Spain. The 22-year-old has proposed the grade of 9b+.
Photo by Band of Birds

German rock climber Alex Megos has repeated King Capella at Siurana in Spain. The climb was first ascended by William Bosi earlier this year and originally graded 9b+.

Germany’s Alexander Megos has made the second ascent of King Capella, the hardest route at Siurana in Spain first ascended in March 2021 by William Bosi and originally graded 9b+ by the 22-year-old Scot.

Megos checked the moves quickly immediately after Bosi’s established the line and returned to Spain precisely with this route in mind. Requiring just nine days of effort for his redpoint, he used slightly different beta to Bosi and as yet has not proffered a suggestion for the grade.

The 28-year-old will continue climbing at Siurana for a while in the hope of repeating some other testpieces; the crag is one of his favourite haunts as it is here that in 2013, aged just 19, he made short work of Estado Critico and claimed the historic world’s first 9a on-sight.

In other Siurana related news, Chris Sharma has reported that he’s developed "a new king line" right in the middle of El Pati sector. Called Sleeping Lion, it has been defined by the American as "perhaps one of the nicest routes in the area."