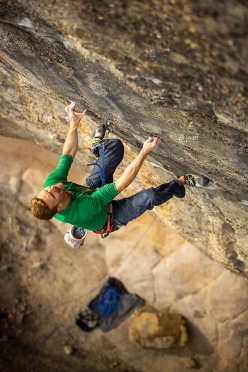 Austrian climber Jakob Schubert has made the first repeat of El bon combat, the superbly difficult route freed by Chris Sharma in 2015 at Cova de Ocell in Spain.

As per tradition, after the competition season Jakob Schubert has decided to spend some time climbing in Spain and, as per usual, the Austrian climbing machine has wasted little time and made the second ascent of El bon combat.

This route was freed in March 2015 by America’s Chris Sharma at Cova de Oceell on the outsklirts of Barcelona and Schubert has now described it as considers it "such an unique route with amazing holds and movements..." As to the grade, instead of 9b/+ suggested by Sharma Schubert considers it a hard 9a+, but what counts most of all is that it’s an "amazing line."

While waiting further repeats and for the grade to be confirmed, it’s worth highlighting Schubert’s current form which is absolutely dazzling and possibly difficult to comprehend even for the 27-year-old himself: this year we was crowned Lead World Champion and Combined World Champion before winning the Lead World Cup 2018, while on rock close to home in the Ötztal he made the first ascent of Synergieeffekt, an 8c+ in just three attempts. Furthermore, at the start of 2018 at Cova de Ocell he flashed Chris Sharma’s famous 8B+ boulder problem Catalan Witness the Fitness. Schubert’s Catalonian climbing holiday has has only begun and promises to be interesting.

2nd Ascent of ‚El Bon Combat’!! One of the best routes I have ever done The one and only @chris_sharma established this amazing line in 2015. Chris actually accompanied me on my last two days at the crag and it was awesome to share the moment of the send with him, thanks a lot for the good times and huge respect for putting up just another testpiece here in Catalunya • The route is situated in Cova de l‘ocell a 45 min drive from Barcelona and I advise every strong climber to try this thing, it‘s such an unique route with amazing holds and movements and pretty suited for boulderers also More ascents would be welcomed because I would love to hear some more thoughts about the grade I know it‘s easy to not think about it and just take the grade of the first ascensionist which is 9b/9b+ in this case but I feel the responsibility to have more thoughts about it. For me it felt easier from the first day I tried it and I would guess it’s a hard 9a+. Curious what others will think • Thanks for the good vibes during this whole trip @felipe.camargo • by @cmmagalhaes With sound on you will hear me say ‚I almost fell again‘ which means the very last move where I fell the try before • #rockclimbing #catalunya #2ndascent #sopsyched #oneofthebest #leadclimbing #climbingvideo

22.10.2018
Janja Garnbret, Jakob Schubert win Lead World Cup 2018
Slovenia’s Janja Garnbret and Austria’s Jakob Schubert have won the Lead World Cup 2018, ahead of Jessica Pilz and Stefano Ghisolfi, thanks to their results at the penultimate stage that took place last weekend at Wujiang in China. The stage was won by France’s Romain Desgranges and by Garnbret and Jain Kim who tied for first. The penultimate stage of the Speed ​​World Cup was won by the Indonesians Aspar Jaelolo and Aries Susanti Rahayu.

30.12.2016
Jakob Schubert whisks up Joe Mama 9a+ at Oliana in Spain
At the Spanish crag Oliana Jakob Schubert has repeated Joe Mama, a 9a+ sports climb freed by Klemen Bečan.