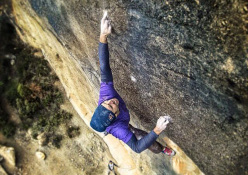 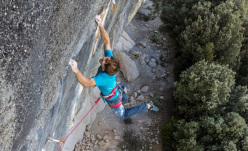 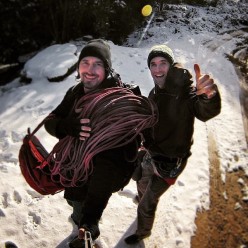 If you ever thought, even for only a brief instant, that Chris Sharma had decided to abdicate from the realm of utmost difficulties, then think again. Two years after the troubled process that culminated in his hardest ever redpoint - the second ascent of La Dura Dura 9b+, a month after Adam Ondra’s first ascent - the American climber is back in force doing what he does best: making the first ascent of another King Line. I.e. climbing a new route that has all the hallmarks, in terms of beauty and difficulty, so as to be considered another sport climbing gem.

The term "King Line" was used by Sharma himself the other day when he freed El bon combat, a project bolted by his friend Martí Iglesias Galobart at the Cova de Ocell crag close to Barcelona in Catalonia. For Sharma it was love at first sight: “I was drawn back to and reminded of what my life has been about for so long; the lines that grab our imagination and inspire us to take our game up a notch , The King Lines . Something created by Mother Nature as if it were designed to be climbed, perfect shapes, just barely enough to find a path up, something worthy of dedicating yourself to 200%.”

In late February Sharma fell off the last moves, stating “ It could go down next try or next year.” Fortunately he redpointed it two days ago and  if the grade is confirmed El bon combat is Sharma’s hardest first ascent ever, following in the wake of other 9b’s such as Es Pontas at Maiorca (2006), Jumbo Love at Clark Mountain (2008), Golpe de Estado at Siurana (2008), Neanderthal at Santa Linya (2009), First Round first Minute at Margalef (2011), Fight or Flight at Oliana (2011) and Stoking the Fire at Santa Linya (9b). All King Lines, of course.

Thanks! Yeah, La Dura Dura was really intense, it was a five year process to reach a new level in my climbing. It was fun, but at the same time it was serious. You know what I mean? I’d said to myself “let’s see what I can really do” and so although I had plenty of fun along the way, it was a different kind of fun, not real, carefree fun. So when I actually proved to myself that I could climb that hard, I was really psyched. But also super motivated to do something else.

To find a counterbalance
Yes, I see myself going through moments of intense seriousness followed by periods when there is more playful side to my climbing. I think this wave-like momentum is part of everyone’s lives, there’s always an ebb and a flow and you’ve got to listen to the inner feeling, go with that flow, never force things. So although I was in great physical shape, that’s why I decided to invest my energies into the Psicobloc competition series, into my new climbing gym in the States, in working closely with my sponsors, in going on a expedition with Stefan Glowacz to Oman, that sort of thing. I needed to step out of my usual comfort zone and visit other places, see something new.

All of a sudden though you caught sight of this new line at Cova de Ocell
Actually I first heard about the route eight years ago when I met Martí, he immediately told me about the cliff and its futuristic routes but at the time I was busy with my climbs at Oliana, Margalef and Santa Linya. I’m really happy and proud to see how these have developed, to see others enjoying my routes, but at the same time I felt I needed something new. I recently moved to Barcelona and was a bit worried about the transition to a big city, but in fact it turned out to be the perfect thing at the perfect moment. Cova de Ocell is a really cool place, peaceful, with a great view and good potential for new stuff. And so I now had this amazing project, just 40 minutes away from home. It was just what I needed, to do my own thing, slowly get back into shape…

On another King Line
Oh yeah, a route has to be truly special if you’re willing to invest large amounts of time and energy. This climb is much more than just an athletic test, it’s spectacular, inspiring, though-provoking. It’s about 25m long, up some really interesting rock, a mix of sandstone and conglomerate that offers some really cool climbing, up this beautiful blue streak and tiny conglomerate pebbles. The moves are unique, completely different from what I was used to at Oliana, Margalef and Santa Linya. Imagine five 8A boulder problems stacked one on top of the other, with a few rests, but nothing great. The moves are very dynamic and yet at the same time extremely subtle, even though they’re right my style I found them to be really tricky. They require lot of coordination and muscle memory, everything has to be just right, you have to be amped but at the same time let it flow effortlessly. It’s at least 9b, but I’ve decided to give it the b+ slash grade because, who knows, perhaps it’s even harder.

What’s next Chris?
You know, I spend lots of time thinking about my future and I’ve often asked myself “where do I go from La Dura Dura?” With this new project I realized I had no pressure, I had nothing to prove and I understood that this is what I really love: trying hard routes of exceptional quality, climbing just for myself. In some ways I’ve gone a full circle and have come back to my roots: in the future I want to climb hard, and I want to do so having great fun!