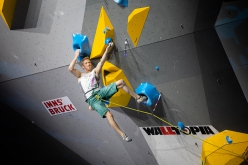 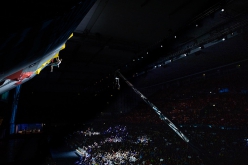 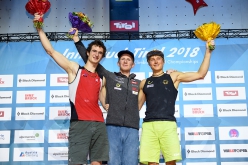 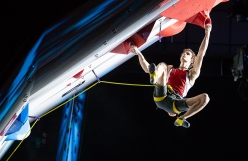 It's been a dream weekend for Austrian sport climbing which, after Jessica Pilz's victory yesterday during the World Climbing Championships in Innsbruck, celebrated its second Lead title this evening thanks to Jakob Schubert. The 27-year-old home athlete claimed his second world championship after winning in Paris in 2012, while Adam Ondra from the Czech Republic placed second and Alexander Megos from Germany finished third.

Ten athletes qualified for the final as a staggering six had fallen off the 34th hold in the Semis. Tomoaki Takata, the first out, managed to climb up to the 29th hold, while his team-mate Kai Harada fell disappointingly low. Young Czech climber Jakub Konecny ​​fell off the same hold as Takata, then the time came for his teammate Adam Ondra. The 25-year-old was gunning for his third World Champion title in a row, in an effort to follow in the footsteps of legendary François Legrand who achieved this triplet in 1991, 1993 and 1995. Ondra climbed with his usual class up to the 36th hold, dashing the hopes of first Marcello Bombardi, then Sascha Lehmann, Meichi Narasaki and even Alexander Megos who looked set to reach anew highpoint before misreading the route and reaching for a foothold. Then came the Innsbruck-based climbing machine Jakob Schubert who, fighting in front of his 5000-strong home crowd, climbed to exactly the same hold as Ondra, which meant that he took the provisional lead as a result of his better semi-final result. At that point the only climber who could ruin the fairytale finale for Austria was the last out, 24-year-old Domen Škofic. But just as for Garnbret last night, it wasn’t to be and the Slovenian failed to demonstrate his true worth on this big occasion, falling off the same 29th hold as Konecny ​​and Takata. Schubert Lead World Champion for the second time therefore, while Ondra won silver and Megos bronze.

The male Lead Championship in Innsbruck will certainly be remembered for Schubert’s deserved fairytale victory but also, unfortunately, for a tiny mistake committed by two of the most expert athletes in the world and the consequent decision of the judges. In the qualifiers both Romain Desgranges, winner of the 2018 World Cup, and the top combined climber Sean McColl inadvertently touched a sponsor logo with their left foot and were subsequently demoted to 49th and 37th respectively; well out of the semi-final therefore. A crying shame, for a logo evidently placed poorly by those in charge. The ensuing controversy was fuelled by the fact that - apparently - even multi-world champion Adam Ondra had touched the 3mm-thick logo. The judges however felt that Ondra’s move didn’t warrant a penalty. It has to be said that even if the Czech had been penalised, he would in any case have qualified for the Semis, but the striking similarity of the moves proved puzzling to most, as could be seen by the numerous comments and replays that abounded on social media. The athletes certainly have no fault whatsoever in this regrettable episode, but as McColl rightly pointed out in his dual role as athlete and president of athletes commission, regardless of this particular incident it is essential that all competitors are treated equally, and that there can be no doubt whatsoever that athletes are always judged according to the same criteria.

18.09.2012
World Climbing Championships 2012, all the results from Paris.
The 12th World Climbing Championship took place in Paris last week. Lead was won by the Austrians Jakob Schubert and - for a record breaking fourth time - Angela Eiter. Boulder was won by Mélanie Sandoz from France and - for the third time - Dmitry Sharafudtinov from Russia. Yuliya Levochkina from Russia won the Speed event and her counterpart Qixin Zhong from China was crowned World Champion for the fourth time in a row. The full report by Franz Schiassi.