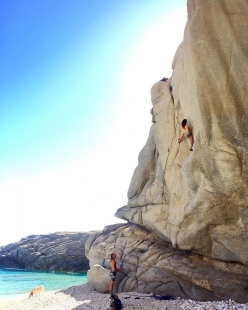 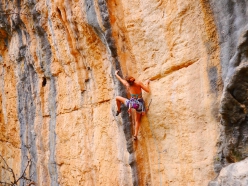 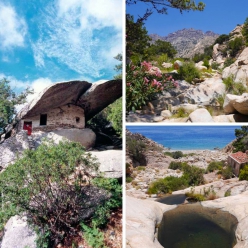 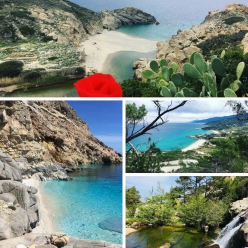 Talented Greek climber Argyro Papathanasiou reports about the unique new climbing destination in Greece, the small island of Ikaria in the Aegean Sea.

Last summer and during this year's Easter holidays I visited Ikaria Island, and it this certainly wasn't the first time there! It’s an island I have been visiting regularlòy for the past 13 years, some times more, some times less. When I first visited I was not even a climber and my main interest on the island were its river pools where you could camp freely and sleep close to the cool riverside as this runs towards the sea.

The whole island feels like its vibrating with its own particular energy. It's a place where time stops, where clocks don’t work. The people who live here have their own rhythm. I remember back then, I used to go to the bakery and since there was no-one in there, one could just take your bread and leave the money. Although this doesn’t happen any more, there is this village where everything is closed during the day and opens at the night. And when I say everything, I mean everything, even the supermarket.

Everywhere on the island there is this feeling of tranquility and calmness and maybe this is one of the reasons for the longevity of its people and the fact it is considered a “blue zone”. Last but not least, people there know how to feast and celebrate the famous Panigiri which take place all summer long as every church’s saint is celebrated. Greek violins and other traditional instruments, singers and huge crowds all come together, with lavish greek red wine, the local Ikariotiko dance and more. It’s a complete Dionysian feast that has to be seen to be savoured!

Apart from all of this, the island offers beautiful walks, excellent surfing on Mesakti beach with its surf school for beginners and… climbing! It looks as if granite boulders rained onto the island creating a moon-like scenery, and a couple of years ago many boulder problems were established and documented in a bouldering guidebook. Although many problems were sent, there is still potential for more. A word of warning though: the granite is rough. Having said that, the friction is perfect.

The cherry on the cake is that as of 2017 the island also offers some some sport climbing. This cannot be compared with Kalymnos of course, which has far more routes and far more tufa climbing. But the small limestone crags and the granite sea cliff offer outstanding climbing nevertheless. I won’t ever forget the climbing we had there, while listing to the live music of a nearby celebration which we then joined after our climbs. At present the driving force behind all this new routing, and the passion for making Ikaria reach its potential, is Evagellos Kastanias, a climber from Ikaria living in Athens who spends his summers and some parts of winter establishing new routes on the island. Of course, many other Greek climbers have helped as well

Right now there are about 6 crags: Droutsoulas, Platanopi, Maggano, Daidalos, Pounta and Seychelles Beach. Droutsoulas has 4 very easy routes then a perfect 6c and 7b and some other routes which are slighting harder. Platanopi was my favorite sector last summer where I cleaned and first ascended some climbs from 6b+ to 7c+/8a, while projects are waiting and some really hard ones on the left overhang! Mangano is a larger sector with a an approach of 20 min where you can find everything and the sector is still under development.There are some really nice long routes there on medium grades 6c-7b and many routes I still did not try. Daidalos is one of the first sectors developed there are so easy routes of 6b+ and some very weird 7a's-7b's.Pounta is bolted in the first part with easy routes till 8a and if you walk further a nice old path there is much more and in a great size rock face with will be bolted hopefully this summer. Last but not least, there is the sector Seychelles right by the beach. This provides an extremely interesting combination of different tock types: wide granite cracks on the left and marble-eque climbing on the right. Five routes at present, unfortunately though with bolts not suitable for sea cliff climbing that will therefore need replacing in due course.

The best time of year to visit Ikaria is spring and autumn, but summer can be ideal too thanks to the strong north winds that blow all season and the shade you can find in some crags. If you like the idea of an alternative holiday destination where you can try various different sports as well and climb at empty crags, then Ikaria is the place to be!