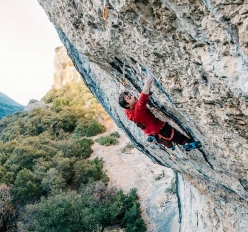 Hugo Parmentier powers up his first 9b, Eagle-4 at St. Léger du Ventoux

21-year-old French climber Hugo Parmentier has made the first repeat of Eagle-4, the 9b sport climb at St. Léger du Ventoux in France freed by Adam Ondra in 2018.

Two 9a’s, one 9a+, circa 45 attempts spread across 23 days and now all of a sudden - and somewhat surprisingly - the rising star of French sport climbing Hugo Parmentier has joined the select few who climb 9b.

The 21-year-old caught many off guard with his repeat of Eagle 4, a stout test at Saint Léger du Ventoux freed in January 2018 by Adam Ondra shortly before his historic, world’s first 9a+ flash on Super Crackinette.

Parmentier started attempting Eagle-4 last September and told planetmountain.com "I must have needed almost two hours just to figure out the moves." After another visit a few weeks later during the La Fête du Spit get-together organised by Greenspits in order to refine the sequences, Parmentier then focused his entire training regime on this route. "I’d attempted other 9a+ in the past, but I’d never been on a route as difficult as this one before." It goes without saying that 9b is in the upper echelon of sport climbing difficulties and hence the French Junior Champion, third in 2015 at the Arco World Youth Climbing Championships, might well surprise us again in the future.