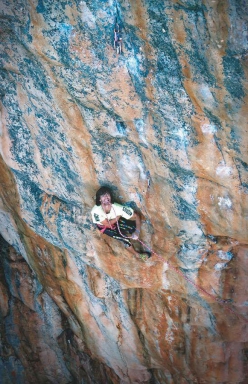 Andy Pollitt climbing Punks in The Gym (32) at Arapiles, Australia. Freed by Wolfgang Güllich in 1985, it was the first ever 8b+ and consequently the hardest route in the world at the time
Photo by Glenn Robbins

Andy Pollitt’s roots were in England. His family were into the Arts but Andy wanted to express himself differently, he chose climbing. His light build, lack of fear and agile skills saw him progress through the climbing ranks. He was a dashing young man and the climbing glitterati ate his image up.

Although he had completed significant routes in Europe, Australia was his mojo. He loved it here and we loved him. The dower English scene was too tame for his liking and this is where he wanted to shine and get a sun tan. He was English, bare chested and sunburnt, that was Andy.

In the early 90’s he took up residence in The Pines campsite at Mount Arapiles escaping the world but somehow bringing its culture with him. He was a light around many campfires.

Andy’s historic legacy is the siege of Punks in The Gym (32), the hardest climb in Australia established by Wolfgang Güllich. Andy became bewitched by its beauty and it’s terror before finally sending the route after countless tries and a number of years. It titles his Biography released in 2016. This memoir can easy have the reader scrambling for reason and that was Andy’s style.

Andy was a professional rigger and made a living from high access jobs. His friends speak of a loyal friend but he also lived a life nursing his mental health and sometimes that was treated by hard living. It lost him friends and at times caused great hardship. Even hero’s cry. Look out for one another.

Andy was a true rock-star. He became a part of the Australian Climbing story and lived a life on the edge. He is now beyond this mortal coil and we hope that wherever his spirit ties in next he has a brilliant climb.

Thanks for your contribution to climbing Andy, be at peace and travel well.

Andy Pollitt
Born in 1963, Andy Pollitt grew up in Prestatyn, North Wales, and started climbing while at school. A regular on the Welsh scene, he was a key member of the small group of brilliant climbers who went on to revolutionise British - and world - climbing. His impact on Welsh climbing was huge, in particular at Gogarth, where he made the first ascent of some of the most stupendous and difficult routes, including The Hollow Man (the first E8 in Wales), Skinhead Moonstomp and A Wreath of Deadly Nightshade, and second ascents of routes such as John Redhead’s psychological testpiece The Bells, The Bells!, on-sight. Other notable first ascents include one of the first E9's on gritstone, Knockin’ on Heaven’s Door at Curbar in 1988. Andy moved to Australia in 1993 having famously made the sixth ascent of Wolfgang Güllich’s Punks in the Gym at Arapiles, before giving up climbing for good – the same day!