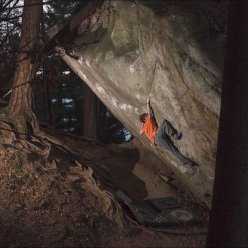 Giuliano Cameroni making the first ascent of REM, an 8C+ boulder next to Dreamtime in Cresciano
Photo by Hannes Kutza

Swiss climber Giuliano Cameroni has made the first ascent of REM, a boulder problem located on the Dreamtime boulder at Cresciano he believes warrants 8C+.

19 years after the first ascent of Dreamtime, the iconic problem at Cresciano established by Fred Nicole that heralded the way into the realm of 8C bouldering, the very same bloc now hosts a new, cutting-edge problem which will no doubt provide climbers with plenty of sleepless nights in years to come. The new line shares the same start as Dreamtime, but then instead of trending leftwards continues straight up on the tiniest of holds, past a low percentage crux move off two micro crimps.

The first ascent was carried out three nights ago by Giuliano Cameroni, on an absolute roll after his first ascent of Poison the Well at Brione just over a fortnight ago. The new problem is now called REM, in line therefore with the Dreamtime theme, and it’s worth noting that Cameroni sent it at 1.00 am since with the advent of spring, it had suddenly become "a little warmer, so the only time that it was less than 10°C was at night."

21-year-old Cameroni, who repeated Dreamtime at the start of 2015, told planetmountain.com "REM and Poison the Well were first tried by Dave Graham more than 10 years ago. I have never seen chalk on the REM holds, so I guess it hasn’t been tried in the last 5 years. I started trying REM in January and it took me 8 sessions to complete it. The key was the mental aspect: during the last four sessions I kept falling off the last hard move without any improvement. After that I decided to take a two weeks break from the boulder. Meanwhile, I was able to climb Poison the Well, which gave me a lot of confidence and motivation to complete REM as well. The night of the send I was positive and didn’t feel any pressure, which allowed me to execute perfectly. Definitely felt like I was climbing in a dream! Also, this whole boulder is hands down my favorite piece of rock and the one I learned the most from. Grade-wise, a new beta has just been found, so the difficulty still needs to be confirmed. Nonetheless it’s still one of the best and hardest lines in Ticino."

REM (8C+) First ascent of the Dreamtime project, same start and go straight up on small crimps. The crux is a low percentage move off two micro grips. Fell on this move for a month, then took two weeks off the boulder and did it first try at 1AM! Thanks @hanneskutza for the pic and @kray_sean for being there and filming. @scarpaspa @prana @stile_alpino @frictionlabs

Psyched to hear @giuliano_cameroni has sent his project on the Dreamtime bloc in Cresciano. REM 8C+ shares the start with Dreamtime but then punches straight up on tiny razor blade crimps. Nice work mate, can't wait for the video! #thecircuitclimbing #thecircuitclimbingishere #bouldering #climbing #ifscofficialphotographer

A post shared by The Circuit Climbing Media (@thecircuitclimbing) on Mar 9, 2019 at 3:56am PST