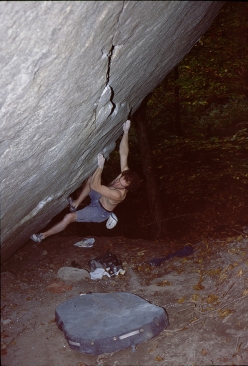 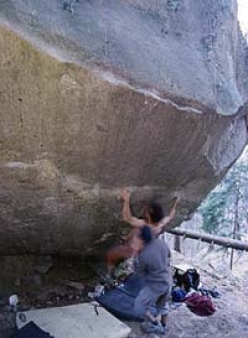 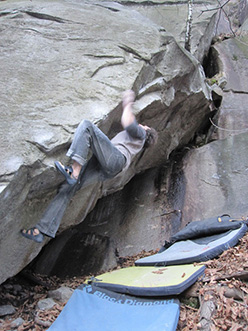 Fred Nicole establishing I Portici at Cresciano
Photo by Planetmountain.com 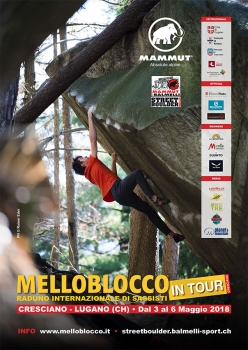 Melloblocco in Tour and the MBB Street Boulder, the great climbing festival that will take place from 3 to 6 May at Lugano and Cresciano (Switzerland).
Photo by Melloblocco

Interview with world-famous Swiss climber Fred Nicole in the run-up to Melloblocco 2018 that will take place from 3 to 6 May at Cresciano and Lugano. In 2000 Nicole made the first free ascent of Dreamtime, the first 8C boulder problem in the world.

Fred, everyone associates Cresciano with Dreamtime and Fred Nicole. But what do you think of, when you hear the word Cresciano?
Me? Chestnut trees, nice boulders, a nice rustical village. Dreamtime isn’t the first thing that comes to my mind, even though of course it is part of my personal history in this area.

Can you tell us about your bouldering beginnings in Cresciano?
In the 90's we went there for sportclimbing with the locals, but I quickly realised the bouldering potential. I remember hiking through the forest with Lauro Lambrini, through the sector which is now known as La Boule, and I remember feeling the potential. It was almost as if Cresciano was talking to us climbers. It was a really overpowering feeling, from a really special place.And even so it took us a few years to switch into bouldering. Back then we didn't go that much to Ticino actually , and I only climbed the first hard problem in 1994, Rêve de Mario, what became the first 8A in the area. That’s when we first started searching for new lines. Not just with difficulty in mind, but more driven by the beauty of the lines. And that’s how finally I discovered Dreamtime at the end of the 90's; it’s such a beautiful boulder, in such a beautiful setting. Just incredible.

As you wandered through the forest in those early days, what were your sensations? And did you ever imagine the area would become so popular?
Bouldering at that time was much smaller that nowadays. There was of course Fontainebleau. Moffatt and Moon were doing their things in England, there was stuff in Yosemite, Joshua Tree, Hueco and there were a few other places in Europe, but it was impossible to imagine the boom that followed soon after.

Dreamtime you said is special part of your personal history. What can you remember?
Yes. It was the result of a personal quest. I have not forgotten much about that period. I remember when I first saw it, I remember reading the line, learning its moves slowly, that late winter of 1999/2000. At the end of the season I I fell off the last move at least 10 times. I had to stop trying as we travelled to Australia and South Africa, and it was on my return in autumn 2000 that I was able to go back and do the first ascent.

A liberation?
A bit. I had tried it, photos had been taken and people knew about the project. So I’d put myself under some pressure, and that’s perhaps why I fell off the last move so often. I had a psychological block. But the day I did it, I found exactly the right flow and was lucky enough to finish the climb.

Tell us about this flow
That’s difficult! When I enter the flow, I can’t really speak about the difficulty, about the specific grade of a climb, it’s more about the moves and the beauty of connecting them. And that’s what brought me to make the first ascent.

Talking about beauty: what are boulders that everyone should try and climb at Cresciano?
At Cresciano? All of them! There are so many good problems at Cresciano it’s hard to make a list. Harispotter is a really cool 7A. One of the first problems we established. Bergführerkante is a wonderful 7A+ arete close to Dreamtime. La Grotte des Soupires is a great 7C+. Of course there is La Boule. And, far more easy, I love the slab close to the area La Grotte. But as I said, all boulders are cool at Cresciano, they all have their charm! I can't tell you the actual names as many were changed for the guide book.

To those taking part in Melloblocco next week, any suggestions?
Just to enjoy the place. I’m sure they’ll manage to appreciate it and find their fun. And of course respect the place and the locals!

30.04.2018
Melloblocco in Tour 2018, instructions for use
Information before the start of the four-day Melloblocco in Tour & MMB Street Boulder 2018 that will take place at Cresciano and Lugano (CH) from Thursday 3 to Sunday 6 May 2018.

25.04.2018
All the beauty and climbing at Melloblocco on Tour 2018
The program, boulders, evenings, games, music, parties and protagonists of Melloblocco in Tour and the MBB Street Boulder, the great climbing festival that will take place from 3 to 6 May at Lugano and Cresciano (Switzerland).

02.10.2014
Cresciano, the bouldering paradise in Switzerland
Claudio Cameroni, Roberto Grizzi and Renzo Lodi introduce, should this still be necessary, the bouldering paradise Cresciano in Canton Ticino, Switzerland. During the high season thousands of climbers flock from all over the world to Cresciano which, this weekend, will host Night Session, the unique international night bouldering meeting.
24.11.2000
Fred Nicole sends Dreamtime 8c at Cresciano, Switzerland
Swiss Fred Nicole sends "Dreamtime" and proposes the first ever Font 8c