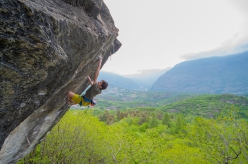 12-year old Gianluca Vighetti from Italy has repeated TCT, a 9a at Gravere freed by Stefano Ghisolfi in 2014.

After the extraordinary ascent of 12-year-old Andrea Chelleris who in July climbed the 9a Pure Dreaming at Massone, Arco, Italy, his peer Gianluca Vighetti is now making headlines with his equally extraordinary 9a ascent of TCT at Gravere. Established by Stefano Ghisolfi in 2014, the route takes the initials of Tito Claudio Traversa, the young Italian climber who died in 2013 as a result of terrible climbing accident. The cliimb has been onsighted twice in the past, by Adam Ondra in 2014 and Alexander Megos in 2017.

Gianluca Vighetti had all the credentials to climb TCT, in fact he laid the foundations in May with his repeat of the 8c+ L'extremacura plus, which shares a large portion of TCT before breaking out and finishing up the cruxy Base jump, an 8b+ in its own right freed by Gianluca's father, Valter. In July temperatures soared and Vighetti jr climbed elsewhere, but now in Sendtember conditions he redpointed the line.

Obviously this 9a ascent at the age of 12 is impressive to say the least, but his other climbs outdoors are equally jaw dropping: he has onsighted up to 8a+ (Kim in Rodellar, an unnamed route at Saume and Racing in the street at Rue des Masques) and bouldered up to 8A (Facilotto alla Grangetta (Condove), Alba Chiara al Levi and Supersauvage in Valdinferno).

As for his repeat of TCT the other day, Gianluca told planetmountain "This route has been a rollercoaster ride of emotions. But the best moment was the first attempt after not trying it for 2 months, when I fell at the crux for the first time.” It was then that he realised his project was feasible. Two days later the route was in the bag.

05.07.2020
Remembering Tito Traversa
Seven years ago Tito Traversa perished in a climbing accident. The void left behind by this great climber, aged a mere twelve, continues to be enormous.

04.06.2014
Stefano Ghisolfi frees TCT 9a at Gravere
At Gravere (Val di Susa, Italy) Stefano Ghisolfi has made the first ascent of TCT , a 9a dedicated to Tito Claudio Traversa.

06.07.2013
Goodbye Tito Traversa
Tito Traversa died yesterday at the age of 12 as a result of a terrible climbing accident at Orpierre in France. He was one of climbing's youngest prodigies. The entire climbing world is shocked and deeply saddened by his death.