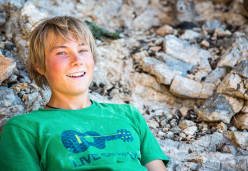 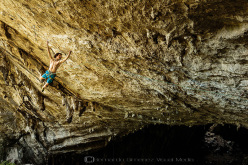 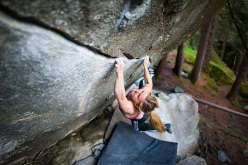 Shauna Coxsey climbing Base Line 8B+ at Magic Wood, Switzerland. Just 5 sessions were needed to climb this 8b+ boulder problem.
Photo by Luka Tambača 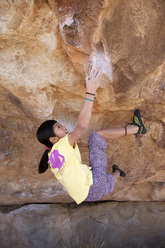 During the last few days Alexander Megos has repeated Biographie 9a+ at Ceuse, Adam Ondra has onsighted the 9a TCT at Gravere in Italy, and both Ashima Shiraishi and Shauna Coxsey repeat an 8B+ boulder problem.

At times it seems as there are brief moments that could described as no gravity days, instances when the force of gravity loses some of its attraction and, wherever you turn, there's yet another astounding ascent. Mid-July 2014, and in particular Saturday the 12th, seems like one of those moments.

Alexander Megos - Biographie at Ceüse
This short summary starts off with Alexander Megos, the German climber who sent Biographie at Ceuse yesterday in just a single day and on his third go. There's no need to underline just how important this 2001 Chris Sharma 9a+ is to sport climbing and it seems equally superfluous to state this this is the fastest ascent to date of this formidable test of technique and endurance. Megos' single day, third go ascent is the new benchmark for this route which, two years ago, had been attempted flash by Adam Ondra who had fallen off the upper crux after having climbed well past the first chain at half-height.

Adam Ondra – TCT at Gravere onsight
Ondra is the subject of this second paragraph, because at Gravere in Italy's Val di Susa the Czech climber managed to onsight TCT, the route freed at the start of June by Stefano Ghisolfi who had hinted at Ondra that the route was feasible in this style. Ondra's success came immediately in the wake of his World Cup disappointment: in Chamonix he had been stopped by the judges in the Qualification round for having skipped the first quickdraw and clipped the second. This brings Ondra's tally of 9a onsights to three, after Il Domani 9a at Baltzola in Spain in June this year and Cabane au Canada at Rawyl in Switzerland in July 2013. It's worth remembering that the only other climber to have onsighted 9a so far in obviously Alexander Megos.

Ashima Shiraishi - Golden Shadow 8B+ boulder problem
Gravity has been put to the test in the southern hemisphere, too, and confirmation comes from Rocklands in South Africa where 13-year-old Ashima Shiraishi repeated Golden Shadow, an 8B+ boulder problem put up by Fred Nicole. This means that the American becomes the second woman to climb 8B+, after Tomoko Ogawa and her ascent of Catharsis at Shiobara in Japan in 2012.

Shauna Coxsey – New Base Line 8B+ boulder problem
Not even 10 days ago, after Shauna Coxsey's second 8B at Magic Wood in Switzerland, we wrote "seeing the latest flurry of ascents, it wouldn't surprise us to see another female 8B+ sent sooner rather than later." Well, 9 days have passed since then, on Friday Ashima Shiraishi confirmed our hunch with Golden Shadow, and on Saturday this was reconfirmed by Coxsey herself who repeated New Base Line, the 8B+ put up by Bernd Zangerl at Magic Wood. The Britain's fast ascent proves once again the female bouldering is currently enjoying a moment of superb growth and also that, perhaps, the greatest difficulty seems to be finding the problem that suits their style completely to make the step and take things one stage further still.