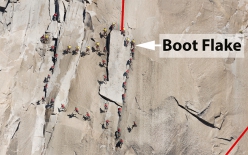 Erik Sloan and Roger Putnam dealing with the famous King Swing at the Boot Flake on The Nose, El Capitan, Yosemite
Photo by BluePlanet VR 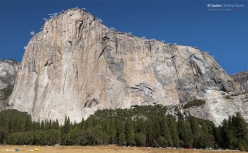 El Capitan in Yosemite. This startling high resolution image was created by stitching together 4000 images and trace all the big wall climbs of El Cap
Photo by BluePlanet VR

The high resolution image of El Capitan in Yosemite, USA, and all its big wall rock climbs produced by BluePlanet VR. Zoom in to explore The Nose, the Salathé, Zodiac and all the other big wall climbs on El Cap.

High resolution photos of El Capitan in Yosemite have been around for a while, but the most recent one produced by BluePlanet VR is by far the most detailed yet.

The image of the huge granite monolith was created by Eric Hanson and Greg Downing who shot the entire width of El Cap with 2000 images to create the base image. The day before, the two had taken a further 2000 photos of Erik Sloan and Roger Putnam as they climbed The Nose in 7 hours, and this was followed by a huge post-production job that required two years of effort. Sloan, who has climbed El Capitan over a hundred times and is author of the acclaimed Yosemite Big Wall guidebook series, subsequently traced all the rock climbs and major features onto the photo to create this startling record-setting 228,000 pixel image.

Click here to zoom in explore El Capitan in all its glory. 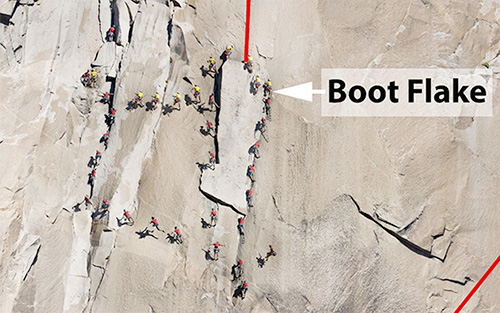 For those interested, the poster-size photo is currently being sold on Yosemitebigwall.com.

21.06.2013
A granite map of El Capitan
For the first time the geology of the SE face of El Capitan in Yosemite, USA has been analysed. The new map could become instrumental in avoiding accidents and rock fall victims.