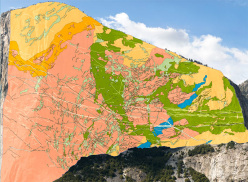 A granite map of El Capitan

For the first time the geology of the SE face of El Capitan in Yosemite, USA has been analysed. The new map could become instrumental in avoiding accidents and rock fall victims.

Have you ever wondered what all those stripes are up on El Capitan? And how complex the geology is of this huge granite monolith, sitting proud in Yosemite Valley? Probably yes, but definitely not as much as Roger Putnam, a University of North Carolina student who spent six weeks analysing the face to create a high resolution map that shows, for the first time ever, all the various types of granite on this beautiful streaked face.

What at first glance might seem like a fun game may play a key role in our safety, both for climbers on the mountain and for tourists in the valley below. According to National Geographic, which funded the research, in recent years a dozen people have died due to rock fall (the latest, unfortunately, at the beginning of June, 28-year old Englishman Felix Joseph Kiernan while climbing El Capitan's East Buttress). This new tool might now help prevent further casualties.

Putnam's fieldwork was helped by other climbers - almost thirty - who collaborated with him in this project. The latest warning comes from them and via the internet: a suspended, loose flake immediately after the King Swing and the Boot Flake on The Nose. Bearing this in mind, there may well be some coordinated efforts to remove the block one day, as has already happened in the past, on the most famous big wall in the world.