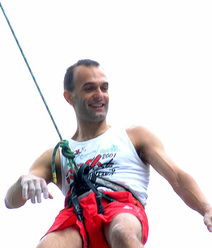 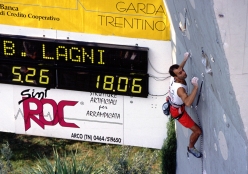 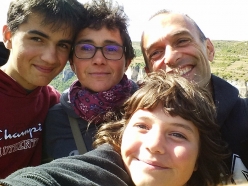 The 48-year-old climber Bernadino Lagni has made a flash ascent of Mantieni la calma, an 8c sports climb at the northern Italian crag Ai Piccoli (VI).

Those who’ve been following the sports climbing news for the last twenty years or so know this for a fact: Italy’s Bernadino Lagni is a true force of nature. Despite his 48 years of age Dino shows no signs of stopping and today, just like two decades ago, he’s still capable of causing amazement and disbelief when you least expect it.

This ability of the climber from Vicenza to perfectly seize the moment reached its apex in 1999 when Dino clung on to 51 tiny crimps to become Lead World Champion - at the time this discipline was called Difficulty - beating Yuji Hirayama, Maksym Petrenko, Arnaud Petit, Cristian Brenna, Alexandre Chabot, Christian Bindhammer and Dai Koyamada in the thrilling Birmingham final. These names need no further introduction and underscore the greatness of that ascent of Lagni who, at the turn of the new millennium, won the Italian Lead Cup twice and also the Italian Lead Championship. In tandem, incidentally, with his talented wife Lisa Benetti.

After bidding farewell to competitions Lagni started successful coaching his young El maneton sports group together with Lisa, and he obviously continued to "pulverise" climbs of utmost difficulties. In particular at his local crag Covolo, where in 2012 he made the second ascent of of L’Attimo, a 9a established a few a months earlier by another local strongman Silvio Reffo.

Just a few days ago the news filtered through via the grapevine of another great ascent, namely an 8c flash at the relatively unknown crag ai Piccoli above Vicenza. 8c flash, it is worth pointing out, it is an amazing result, reserved to a very few climbers in the world. Lagni's came in a moment when he’s particularly on form but also almost by accident. "I happened to meet Omar, who was trying the route, and he explained all the moves. I didn’t set off with the idea of flashing it, but with a little luck and driven on by the cheers of those below me… I clipped the anchor!"

As usual Dino downplays his performance. "You know how these things are" he told us "there are many different ways of flashing a route. You might know just one move, or you can have someone guiding you up it. I was lucky to have had Omar who explained all the sequences." While it’s certainly true what Dino says, the result remains unchanged: 8c flash, hats off!

"Ah, one last question" - we ask him right at the end of the call "out of interest, what's the route called?" "You won’t believe me, but I really don’t know!" replied Dino. "I was so overjoyed that I forgot to ask!"

For the record, the climb is called Mantieni la calma (Keep Calm),was bolted by Walter Forrer and freed by Marco Savio.