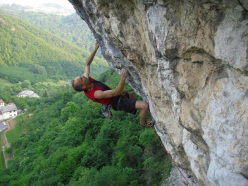 Last Saturday, in appalling, paltry heat which only the northern Italian Padana plain can offer, the Italian climber Dino Lagni made the first repeat of L'Attimo, the new 9a freed a fortnight ago by young Silvio Reffo at Covolo.

"I'm really really happy" confided Lagni who at present is on holiday at the seaside with his family where he know has time to reflect about his latest ascent which marks a further step forward in his climbing career. As many know, Lagni has a superb vertical curriculum which includes some stages in the Lead World Cup as well as the historic Lead World Champion title which he won in 1999 in Birmingham against legendary Yuji Hirayama. At 44 years of age Lagni shows no signs of slowing down, on the contrary, and he has now sent his first 9a. "I haven't got too much experience with this level of difficulty..." explained Lagni "but if Superale is 8c+, then L'Attimo must be 9a! Well done to Silvio Reffo for having had the idea!"