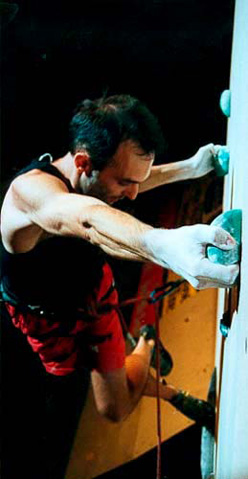 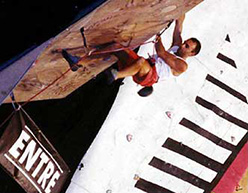 Dino Lagni competing in the final in Climbing World Championship at Birmingham, 1999
Photo by Guy Maddox 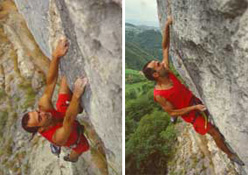 Flashback
Birmingham Sunday 2 December 1999. Dino Lagni is the new World Champion. He, perhaps more than anybody else, is the first to be amazed at this result. It is the first time that an Italian becomes World Champion, and a historic moment for Italian sports climbing.

What are the qualities that make an athlete a winner?
The list is long. In Dino's case, his proverbial stamina and capacity to crimp micro edges. Those who have seen him climbing at Covolo, his favourite crag, or the wildly steep Erto, can testify to this.

There is never a definite answer to this kind of question in any sport. At times it is subtle, almost untouchable, that extra something that makes you a winner. But the grit and determination shown in the photos taken at the Master at Malè remain deeply ingrained. They are the demonstration of the overwhelming strength and desire of one of today's strongest climbers and athletes...


Birmingham, December '99. Bernardino Lagni World Champion, are you used to this title now? What do you remember most vividly?
To compete at the World Championship was already something of an achievement. My biggest dream in England was to qualify for the Semi-final, to then perhaps have the chance of getting into the Final. I never imagined what happened next, and even now when I think about it I feel shivers run down my spine.

Has anything changed since that victory? Are you stronger psychologically, or do you feel under pressure now that you are no longer an outsider but someone to beat?
It makes me laugh when I hear that. Obviously I feel some pressure, above all from myself though, because sometimes I ask myself whether it was just luck. So I continuously put myself to the test in every competition. In our sport the physical moves, the adrenalin, the emotions and fear are all inseperable elements, and if they weren't, where would all the fun be?

For various years now those in the know have talked about your intense training sessions indoors and at the crag. Do you have any particular training method?
I've always really enjoyed myself when training. I don't have a precise method and I climb indoors and outdoors according to how I feel.

What are your beginnings as a climber and the most important stages in your climbing career?
I started many years ago with my friend Andrea and since then I’ve never stopped. I was fascinated by the rocks and the long journeys to discover different crags. Probably the most fundamental aspect was the group of friends I had – we always had fun together. It's the same now, too, just the people are different. But the most important thing was meeting Lisa, who then became my wife. We always train and climb together.

Why did you decide to take part in competitions?
Because I wanted to meet really strong climbers, who at that time were already on-sighting 8a. And they really were as strong as they were made out to be by the climbing magazines! When I came back from the competitions I told my friends about the incredible dead-hangs they did with just one hand on miniscule edges. I had seen it with my own eyes and that really motivated me. The crag is still my favourite place to climb though, because there are so many other things that revolve around it, friends, journeys, holidays!

You are often referred to as an employee who wins, someone who has to combine his work with climbing. This definition doesn’t fit you very well, what do you think?
I’m very lucky to have a wife who climbs really well, if this weren’t the case then I don’t think I’d be able to train almost every evening and to spend Saturdays and Sundays at the crag. On the other hand, I think most climbers have to somehow combine their passion with a normal life. The point is though that our sport takes up so much time and it’s difficult to be satisfied with half measures! To conclude, no, the definition doesn’t fit me very well, on the contrary, it makes me feel part of a very large club indeed!

What are the good and bad things about competitions?
The nice thing is being able to give it your best, regardless of the final result. The bad part is slipping off the starting holds, but perhaps even worse still is falling because you’ve misread the sequence.

And the crag?
The crag is my favourite place to climb, especially new crags that I’ve never been to before. Like competitions you need to put in effort and desire to reach the top, but the only competition here is against yourself!

How much does being part of the “El maneton” climbing team, one of the strongest in Italy, mean to you?
A lot. Together we form a really close group and this gives us strength and motivation. When something goes wrong you can always be happy for someone else; there’s a team spirit which always makes me feel at ease.

What are your strong points and what areas do you need to work most at?
My stamina is probably my strongpoint. I feel I need to improve a lot on physical moves and dynos. I’m not the best at interpreting the routes correctly. And technique, well, you can never learn enough about that.

You are a member of the Italian Climbing team, which has an important role in promoting sport climbing. What is your relationship with the team?
Unfortunately I live a long way away from the others and the only time we meet is at competitions!

Are there any athletes you consider to be your role model?
It’s a bit of a cliché, but Patrick Edlinger is my idol!

What do you admire most in a climber?
Technique

What are your immediate and long-term plans?
At the moment to train on this board behind me and then I’ll see. Tomorrow’s another day!

Your dream as a climber?
Seeing that Federico has recently brightened up our nights with his innocent crying – sleep, sleep, sleep. Hello to everyone and happy climbing!