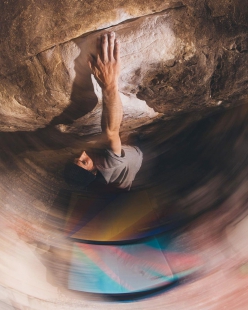 Daniel Woods making the first ascent of Return of the Sleepwalker, a 17-move problem at Red Rocks, USA which he has graded V17/9A. As such it one of the very hardest boulder problems in the world.
Photo by Bobby Sorich

Daniel Woods establishes Return of the Sleepwalker, 9A boulder problem at Red Rocks

American rock climber Daniel Woods has made the first ascent of Return of the Sleepwalker, a 17-move problem at Red Rocks, USA which he has graded V17/9A making it one of the very hardest boulder problems in the world.

31-year-old Daniel Woods has further consolidated his standing as one of foremost climbers in the world with his first ascent of Return of the Sleepwalker, a 17-move boulder problem in the Black Velvet Canyon at Red Rocks in Nevada, USA.

The problem adds an extremely crimpy sit start to an existing problem, the V16 Sleepwalker which was first ascended by James Webb in 2018 and repeated by Woods in early 2019. Although he first started trying the obvious sit start almost immediately, it wasn’t until 3 months ago that he really started to concentrate all his efforts on the bloc and the sit which, as he told planetmountain.com, "adds in 7 moves of 8B into the stand."


In total there are 17 moves to the finish jug, past extremely burly undercuts and a blind move to a small crack above the sloper, followed by another leap to an extremely poor left handhold where precision is absolute key, before a toe hook finish leads to the final jug. Woods fell from the final move last week (featured in the video below), and kept it together for the send a few days ago, describing the line as "Some of the best rock I’ve climbed on and coolest set of holds."

Return of the Sleepwalker is currently only the second boulder problem in the world to be graded 9A/V17; Nalle Hukkataival established the world’s first 9A, Burden of Dreams, in Finland in 2016 and this is currently unrepeated. In the meantime two other boulders received the 9A proposal but were subsequently downgraded by the second ascensionists: No kpote only at Fontainebleau in France freed by Charles Albert in January 2019 and downgraded by Ryohei Kameyama, and nearby Soudain seul established in February 2021 by Simon Lorenzi and downgraded earlier this week by Nico Pelorson.