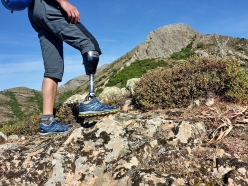 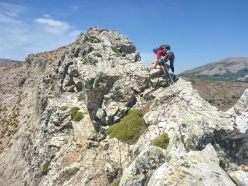 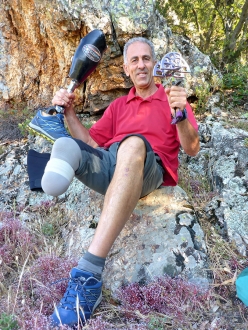 Cut off my leg!

The must-read report about the first ascent of the South East Ridge of Monte Muru Mannu (Domusnovas) Sardinia, carried out last June by Marco Marrosu and Lino Cianciotto. By Marco Marrosu.

"I told the doctors right away to cut off my leg!" Lino Cianciotto, sitting on the hospital bed, nursed what was left of his leg in his hands. He clutched his quad and from the knee onwards, the rest of his limb and foot were no longer. He smiled and we chatted with excitement, both marvelling at the fact that without the rest of his leg to weigh it down, the knee refused to lower itself and remained bent upwards. "Every now and then I feel a terrible itch in the foot I’ve no longer got” ... bizzarre!

Lino is walking guide, photographer, author of many guidebooks to Sardinia’s Sulcis-Iglesiente region and owner of the company "Naturalmente Sardegna". During one of his many walks a huge boulder unexpectedly dislodged and crushed part of his leg. After having been rescued by the CNSAS, as soon as he entered the hospital Lino, while looking at his leg and examining the perplexed doctors, serenely asked them to amputate it. He continued to hammer the message home during the next days but to no avail as the doctors believed he was still in an, albeit strang, state of shock.

When the decision was finally made that an amputation was indeed the best solution, the phrase "and what I told you so" put an end to all discussion.

My love for adventure and exploration implies going"beyond", having an open mind for new solutions and new experiences, often never tried before. I believe Lino fully believes in this philosophy, too, and a short while later he’d already started planning a new objective: start doing exactly the same things as he’d always done. So there he was, with a prosthesis accompanying astonished clients across the mountains, under water with an oxygen tank, or pedalling for miles on his mountain bike. The "new leg" almost became a game, a sort of challenge to see “how far I can push myself?”

In the meantime I’d identified a long and exposed rocky ridge while inspection a photo published in a book. Lino clearly knew the area like the back of his hand, and during a brief phone call he quickly explained how to get there. The ridge had never been climbed before and trying to climb it together seemed like a nice present.

A new rock climb, established trad, with this sort of disability… who knows how we’d get on? In cases like these, there is only one solution: plan ahead in order to avoid the unexpected as much as possible, and then just give it a go. Because you learn from your mistakes, and these open doors to new horizons.

So there we are, below the rock face. Lino puts on his prothesis. And my first question is: will the Friend hold more, of the friction on his prosthesis?

We start up into out "new terrain" and our outing along the ridge becomes increasingly exciting! At the start the ridge is discontinuous and with loose rock, but it then becomes solid and knife-edge. One pitch after the next the climbing become more fluid. Lino collects the gear I placed, follows the three points of contact rule, and then we finally reach the summit. The view is outstanding, but this isn’t the only amazing thing: I'm happy because today is a special day. At the top I notice that we’re stand on our 3 feet, and that today we achieved something completely new. Mental barriers are the hardest obstacles to deal with, but once they’re broken a new world opens up before you.

I watch Lino slip during the descent, and two seconds later I land on my back, too… All I can do is laugh!