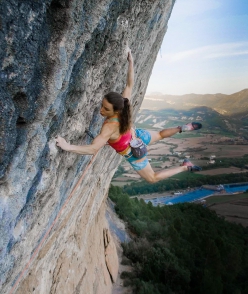 Anak Verhoeven making the first repeat of the Patxitxulo 9a/+ at Oliana in Spain.
Photo by Ezra Byrne

Anak Verhoeven sends Patxitxulo 9a/+ at Oliana in Spain

Belgian climber Anak Verhoeven has made the first repeat of Patxitxulo 9a/+ at Oliana in Spain.

Anak Verhoeven has celebrated her return to full fighting form after rupturing a pulley just over a year ago with the first repeat of Patxitxulo 9a/+ at Oliana in Spain. The route is a connection of an existing 8c+ and a 9a+, more specifically the cruxes of Joe Blau and Papichulo, and was first linked by Patxi Usobiaga in 2017.

In the past, the 25-year-old Belgian climber has climbed three 9a+, Joe Mama at Oliana once again, Sweet Neuf at Pierrot Beach in France in 2017 and, later that same year, Ciudad de Dios 9a/+ at Santa Linya. Shortly before getting injured she established the most difficult sport climb in Belgium, Kraftio dedicated to the late Chloé Graftiaux.

05.06.2020
Anak Verhoeven frees Kraftio, the hardest climb in Belgium dedicated to Chloé Graftiaux
Anak Verhoeven has made the first ascent of Kraftio, an old project in Belgium. Graded 8c+/9a it is currently the hardest climb in the country and is a tribute to Chloé Graftiaux, the talented Belgian climber who perished in 2010.