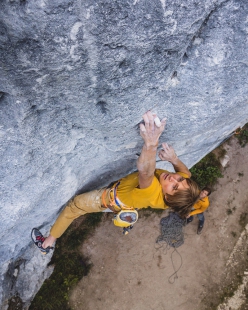 German climber Alexander Megos has made a first-go ascent of Intermezzo XY gelöst 9a at Plombergstein in Austria.

Alexander Megos continues to be one of the best in the world, not only at redpointing but also at onsighting and flashing climbs. I.e. after work, first go without any prior information and first go with route beta. So after famously completing the world’s first 9a onsight on Estado Critico at Siurana in Spain in 2013, the German climber repeated this performance in 2017 on TCT at Gravere. It goes without saying that these are rare occurrences, and in 2020 he returned to flash form on the 8c+/9a Underground at Arco in Italy. Now the 28-year-old has flashed Intermezzo XY an old route at Plombergstein in Austria put up by local powerhouse Klem Loskot many moons ago and in many ways a sort of boulder problem on a rope.

Talking to planetmountain.com after his ascent, Megos explained "I had a lot of information about the route. It's not very long, just three quickdraws in its 7 or 8 meters. Very similar to climbing in the Frankenjura. Two people were climbing there, and Roland explained all the move, went up and cleaned the holds, and then belayed me. I knew exactly what to do, and it worked out pretty well I’d say."

The current limit of the queen of all disciplines, onsighting, is set at 9a thanks to both Megos and Adam Ondra, while Ondra is currently the man with the world’s hardest flash: 9a+, achieved on Super Crackinette at Saint Léger du Ventoux in France in 2018.