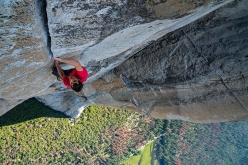 Alex Honnold standing in front of El Capitan, Yosemite, USA where, on 3 June 2017, he carried out the monumental free solo of Freerider
Photo by Free Solo / Jimmy Chin

Forgive us for yet another video of Alex Honnold and his monumental, ropeless ascent of Freerider up El Capitan in Yosemite in June 2017. But, while waiting anxiously for the film Free Solo, it’s certainly worth watching this short 360-degree video clip. Mind-blowing.

02.11.2018
Alex Honnold, Freerider, El Capitan: what if he falls?
The short film featuring Elizabeth Chai Vasarhelyi and Jimmy Chin as they analyse the production of Free Solo, the film that documents Alex Honnold and his climb without ropes of Freerider up El Capitan, Yosemite, USA in June 2017.