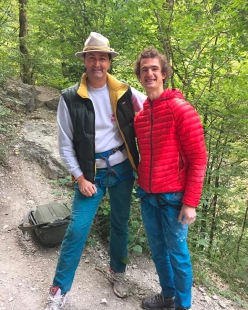 The Czech climber Adam Ondra has made the first repeat of Qui at Geisterschmiedwand in Austria, established in 1996 by Austria’s Stefan Fürst.

Those who have been following planetmountain.com regularly for a while may perhaps remember our article, published in 2012, by Adam Ondra entitled The routes I cannot climb! At the time 9b+ didn’t exist, 9c was a mirage, yet Ondra had already climbed a handful of 9b and was still gauging his worth on the test pieces of the 1980’s and ’90’s. One of these which had stumped his efforts was Qui at Geisterschmiedwand in Austria, freed back in 1996 by one of the strongest - and least known - Austrian hotshots, Stefan Fürst.

Now, after attempting the line on and off since since 2008, Ondra has finally redpointed the route and, in doing so, pulled off the first repeat. As to the grade he suggests something in the region of 9a+ (he believes broken holds are insignificant to the overall difficulties), but grade aside, the most beautiful thing is that on his successful redpoint Ondra was belayed by Stefan Fürst, the man himself who freed the line 23 years ago. Here's how article Ondra had described the route in his 2012 piece:

Qui 9a (1st redpoint Stefan Fürst 1996, Geisterschmiedwand, Austria)
The hardest route on this outstanding wall but which is not friendly for trying hard routes because it's notoriously wet despite being exposed to the sun from 9am onwards, which means the only time to try it is early in the morning. Stefan worked hard on this route: Qui climbs the crux of Wagnis Orange, arguably the world's second 8c (although initially graded 8b+) first ascended by Gerhard Hörhager in 1988. After first 10 meters of Wagnis and at least 8b+ climbing you keep going straight upwards instead of out right. Those 10 meters pump you out, everything is on bad crimps and slopers and the rests are poor. As you leave Wagnis you get to a poor rest and take a look at the heinous boulder above your head: tiny crimpy sidepulls at their very best. I spent 5 days on this route and I was in very good shape as I was crushing all the other 9a's very fast, but failed, breaking a crucial foothold on the last day. Something might have broken soon after Stefan's ascent, but after my break the route will surely not be less than hard 9a+. In any case, it is unrepeated.

Last two weeks I have been preparing for the upcoming World Cup in Kranj and the European Championship in Edinburg in lead. As the only short-term goal is only lead and the character of lead climbing is still relatively close to rock climbing, I took the advantage of climbing on the rock last few days. On Thursday I finally repeated my nightmare route - Qui 9a or 9a+ in Geisterschmiedwand, Tyrol, Austria. It was first ascended by Stefan Fürst @derwandmacher back in 1996 and had not been repeated since then! The route is hard. It climbs most of the hard part of Wagnis Orange (8c, FA @geriroc Gerhard Hörhager 1988 - possibly world’s second 8c), then bad rest and followed by brutal crux featuring huge wide moves on tiny sidepulls. I would say 8c into 8A boulderproblem. I first tried in 2008 and I had been coming back repeatedly over the last years, but never suceeding in repeating the route. I never had more consecutive days, always one day trying and then almost one year break. After spending over 10 days over the last 10 years, this time it finally came together. It was even more special as Stefan was on the other side of the rope belaying! Regarding the grade, it is really hard to tell. One hold and at least one foothold have probably broken since Stefan’s ascent, but honestly I do not really think it has changed that much. Stefan gave it a 9a back in a day, I think the current state is closer to 9a+ even though the crux is very special and morphological. No matter how hard the route was in state of Stefan’s ascent, it could have been one hardest route at that moment and it took over 60 days fro Stefan to complete. The ascent was captured for another RTT episode, to be released in 9 days! @lasportivagram @montura_official @blackdiamond @mazagrande

12.01.2012
Adam Ondra, the routes I cannot climb!
Czech climber Adam Ondra talks to Planetmountain about the sport climbs he has failed to climb. Hubble, Three Degrees of Separation, Underground and many more.