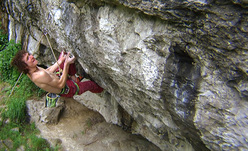 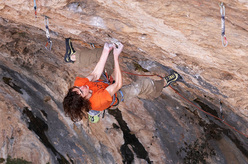 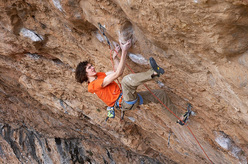 Czech climber Adam Ondra talks to Planetmountain about the sport climbs he has failed to climb. Hubble, Three Degrees of Separation, Underground and many more.

Human after all! While having become accustomed to hearing and reporting about Adam Ondra's amazing success stories on some of the hardest sport climbs and boulder problems in the world, one might be tempted to think that everything comes easy to one of the world's absolute climbing talents. Obviously this isn't the case. His sends have come about thanks to a mix of the purest talent combined with unbelievable efforts which, not always, result in success. So while the 18-year-old from the Czech republich enjoyed his well-earned fortnight's rest period, we thought the time had come to view his climbing from a different angle, from the prespective of those routes which have said no! An analysis therefore of some of his failures, explained by Adam Ondra himself. The routes, listed in alphabetical order, range in difficulty from 9a+ to 8b (all freed by other climbers, one even over 20 years ago) and have all resisted Ondra's onslaught... Yes, Ondra is human after all!

A bouldery start which is about 8c+ in itself leads to Open Your Mind, a a low end 9a with good rests I had sent second go in 2008. A year later, after two or three days I made my way through the first bouldery section for the first time, but fell off above on Open Your Mind. The next day I fell off even higher, in the last section which isn't more than 8b/b+ in its own right and, in addition, the rest below this section is fairly good. It was stressful falling off the sections which felt so easy the year before. But I fell there once more even, and after five days of trying I went somewhere else to give my mind a rest from. At the end of the trip I returned to the cave thinking that I would crush it, but success was far off.

Hubble 8c+ (1st redpoint Ben Moon 1990, Raven Tor, UK)
The world's first 8c+, which could be easily even 9a in my opinion. It is not the most inspiring line, it seems more like a boulder problem with a rope and easier topout, but one must admit that it is of revolutionary difficulty for its time and I believe that it isn't by any means easier than Action Directe, the world's first 9a established a year later. I've tried it for two days only, once in 2010 after the World Cup in Sheffield and, not being very fresh, I didn't do one move, a match of the underclings where Scottish climber Malcolm Smith could even chalk up for the camera of Heinz Zak! A year later, early one morning on the last day of my England trip, I tried hard and could indeed feel a significant difference thanks to some time spent on the campus board, but despite being close I failed. Strong Britons!

Jungle Speed 9a (1st redpoint Daniel Jung 2010, Siurana, Spain)
A bouldery route just to the right of La Capella, a 9b I established in spring 2011. I started trying this route parallel with La Capella in winter 2010, while on my mission to repeat Golpe de Estado 9b and when it was too cold to climb such a long route as Golpe. A bouldery route was just the right way to avoid numb fingers and being blown away by the terrific wind. I always tried La Capella first and then moved on to Jungle Speed, but this didn't turn out to be a particularly good tactic. The last day of my 2010 trip was the only day when I went for it fresh and I fell off the very top, or rather slipped off, because of numb and dry fingers. In 2011 the same happened, trying when too tired, quickdraws hanging there for a 10 days, neglected for the most of the time. After my ascent of La Capella on the last day of the trip, I was excited and thought that I could finally do it, but was way too optimistic! I was so sore that I was happy just to make my way up and take the quickdraws out...

Orca 8c+ (1st redpoint Alex Huber 2001, Schleierwasserfall, Austria)
This route is located in the upper part of Schleierwasserfall, in the Aquarium sector. It shares the same start as an old project which I later climbed and called Fugu (9a), but Orca exits left below the crux of Fugu. Up to this point it is no more than 8a, but the short bouldery sequence after you leave Fugu must be around 8A+ boulder. Two heinous moves. In the space of two meters there is nothing but a slopy pocket and a millimetre edge which serves as an intermediate. To date no one except Alex has been able to do the single moves.

Qui 9a (1st redpoint Stefan Fürst 1996, Geisterschmiedwand, Austria)
The hardest route on this outstanding wall but which is not friendly for trying hard routes because it's notoriously wet despite being exposed to the sun from 9am onwards, which means the only time to try it is early in the morning. Stefan worked hard on this route: Qui climbs the crux of Wagnis Orange, arguably the world's second 8c (although initially graded 8b+) first ascended by Gerhard Hörhager in 1988. After first 10 meters of Wagnis and at least 8b+ climbing you keep going straight upwards instead of out right. Those 10 meters pump you out, everything is on bad crimps and slopers and the rests are poor. As you leave Wagnis you get to a poor rest and take a look at the heinous boulder above your head: tiny crimpy sidepulls at their very best. I spent 5 days on this route and I was in very good shape as I was crushing all the other 9a's very fast, but failed, breaking a crucial foothold on the last day. Something might have broken soon after Stefan's ascent, but after my break the route will surely not be less than hard 9a+. In any case, it is unrepeated.

Three Degrees of Separation 9a (1st redpoint Chris Sharma 2007, Ceuse, France)
A very proud line with some of the craziest moves I've ever seen. Three massive dynos into perfect jugs is something that is very rare on rock, especially in the middle of a route. I tried for four days in 2010, but was actually never able to do the crux dyno, not even as a single move, although I was very close. You have to be able to do that dyno easily as a single move, because the 20 meters of 8c below really pump you out. Well, dynos aren't my cup of tea, I don't have the pure explosive power to perform them, but at least I can take advantage of my height. In any case, the fact that it remains unrepeated despite many attempts indicates that this one could easily be upgraded...

Undergroud 9a (1st redpoint Manfred Stuffer, Massone, Italy)
The idea of trying this route on-sight or flash took form when I was nine yeas old. A journalist from a Czech climbing magazine asked if I wanted to try Underground in the near future, since it had just been repeated by Tomas Mrazek, at that time definitely my role-model. And my answer was as simple as my childish soul, seeing barriers which have no limits, no matter how crazy it might seem: “'I will save it for the on-sight!'' A couple of years later I gave up believing that an on-sight might ever be possible and watched the video of Tomas doing it. The idea of climbing it first go didn't seem that impossible any more: I'd seen the video, so why not try the flash? In on-sights and especially in flashes, it is very difficult to deal with the pressure, it is extremely difficult to keep doubts at bay, but in spring 2011 I felt strong enough, both mentally and physically. I was confident that I was in a good shape since I was just returning from my successful trip to Andalucia and as it turned out, I almost managed to control my emotions and almost flashed it. I did the middle section, fighting hard, being very precise and machine-like, but hesitated briefly in the upper section, I worried about the correct body position for a moment, lost power and fell a few moves higher, coming so close to fulfilling my childhood dream... I fell close to the ground, lowered off and never tried it again.

Vibrot 8b (Seynes, France)
In Spring 2010, on the way to Spain and after a short illness I wanted to warm up a little at this crag in Southern France. I on-sighted a few 8a+ and 8b's, and at the end of the day I chose a slightly overhanging 8b on the left-hand side of the cliff. An on-sight was out of the question and I even had a hard time doing the individual moves. The route climbs terrible crimps with poor footholds and it was very hard to locate the few holds on this wall. And so my second go was far from from being successful, too.


There are of course many other routes, even in the lower grades, which I've failed to climb, but those I've talked about are the ones that, for one reason or other, have frustrated me most. And of course I've failed on many more boulder problems, since in bouldering it's easier to come across certain one-movers that don't suit my style, or perhaps the line doesn't inspire me enough to keep trying. But one day I might be back!