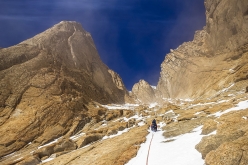 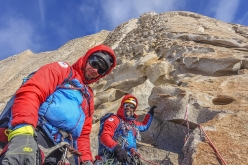 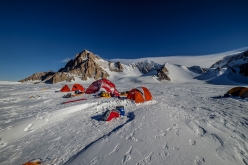 The French Base Camp below the Pirrit Hills, Antarctica
Photo by GMHM 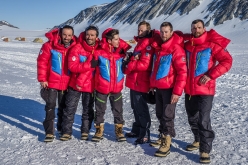 From 11 to 20 January 2018 an elite French military mountaineering team Groupe Militaire de haute montagne (GMHM) expedition led by Jean-Yves Igonenc travelled into the heart of Antarctica to explore the little-known Pirrit Hills massif. According to the French these mountains had previously only been visited by scientists and "the surprise was beyond expectations."

Located only 9° from the South Pole and surrounded by thousands of square kilometers of ice, the Pirrit Hills are a Nunatak, this word of Inuit origin refers to a small isolated massif that emerges from the ice cap. After having established base camp the next day the mountaineers rushed off towards the hitherto unclimbed mountains.

While Arnaud Bayol, Dimitry Munoz and Didier Jourdain made the first ascent of Corrasion, a "majestic route in a strangely sculpted rock" up the virgin Mount Turcotte, the next day and just a few kilometres away Antoine Bletton and Sébastien Moatti opted for the central ice gully up the 800m high north face of Mount Tidd, at 2244m the highest point of the Pirrit Hills.

Battling temperatures as cold as -20°C, over the next days the alpinists continued their new routing and established a further 3 climbs, namely Ardi up an obvious couloir on the North Face of Mount Tidd, Three little Birds via the NE gully of Mount Goodwin and Paradis Blancs up the North Face of Mount Turcotte. On 19 January Munoz and Jourdain started up the striking lefthand pillar of Mount Tidd but were forced to abandon their attempt.

Having successfully established five new routes, four members of the expedition then returned to the base on the Union Glacier by snowkite, pulled for almost 200 km on their skis by the wind and covering the terrain in just a few hours instead of what would have required almost a week by conventional means.

01.03.2018
Huge Fosslimonster icefall repeated in Norway by French alpinists
Fosslimonster at Gudvangen, reputed to be one of the longest and most beautiful ice climbs not just in Norway, has been repeated by a flurry of French alpinists including Pierre Labbre, Max Bonniot and Léo Billon. The video of what are quite possibly the first repeats since the route was established in 2009 by Robert Jasper and Roger Schäli.