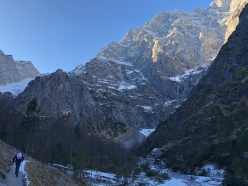 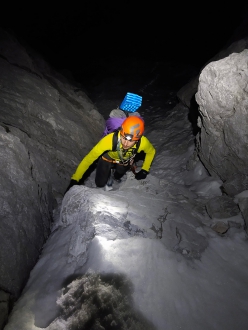 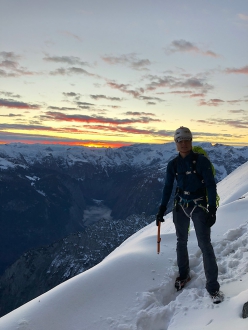 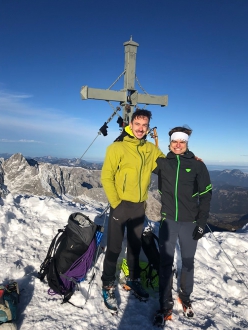 Maximilian Buck reports about the first winter ascent of Franz Rasp Ged. Weg up the huge east face of Watzmann (Berchtesgaden Alps, Germany), carried out in December 2020 with Lando Peters.

Climb the hardest route through the highest face in the Eastern Alps in winter? Sounded tempting! Lando's suggestion to venture through the legendary Watzmann east face via the Franz-Rasp-Ged.-Weg, a rarely climbed direct variation to the classic Salzburger Weg, needed no further prompting. Conditions looked ideal shortly before Christmas, and on 19 December 2020 we set off.

We left the parking lot next to the Wimbach Bridge at Ramsau highly motivated, packed with climbing equipment and bivy gear. Our goal of day one was to ascend via the Kührointhütte mountain hut to St. Bartholomä, and from there continue via the ice chapel to the well-protected bivouac boulders at Schöllhornkar.   The alternative, far easier "approach" via the Königsee ferry wasn’t an option due to the Covid-19 situation. Having said that, we arrived at the first stop-off relatively relaxed, having negotiated 13km and approx. 400 m of easy climbing  past steep, rocky terrain.

We were not all too far away from the actual start of the route, and planed to start early up the route established in 1999. We were off at first light in order to make the most of the few hours of daylight on the shortest weekend of the year, however, we wasted almost an hour and a half looking for the start, having passed it by mistake believing it to be further to the right.

When we finally started up the first pitch, the climbing turned out to be adventurous right from the outset due to the at times very poor rock quality. The belays, contrary to what was indicated the topo, were not all equipped with two bolts but instead were often rather dubious; as indicated in the route description, a hammer and pegs would have been helpful after all. So once again we were grateful to have our totem cams clipped to our harnesses and to place them at the most critical sections.

The last pitch in particular, graded "only" VII-, provided the greatest challenges. Fortunately, Lando succeeded right away, although we probably didn't climb the original line and couldn't find the two intermediate bolts. The belay he constructed, on a large boulder, had to be anchored properly since in the end I aided sections of this crux pitch.

When we finally both reach the first ledge system on the east face at around 3 p.m. after having climbed 350 vertical meters, we were very happy. But it was far later than we’d planned and we had to accelerate to climb the remaining 700m of the Salzburger-Weg, often wading through knee-deep snow, in order to reach the east face bivouac at 2,440m. Once there, we shared the last muesli leftovers before quickly falling asleep, somewhat knackered, but extremely satisfied.

Day three dawned with a wonderful sunrise far behind Königssee. The ascent to the summit was steep in parts but the mixed terrain provided no further difficulties and we reached the south summit at 9:30 a.m.

According to the Longlines guidebook, the route is the most difficult one on the east face and for both of us it was without a doubt an unforgettable and very intense experience. As we later found out after talking to the first ascensionist Michael Grassl, ours was probably the first winter ascent of this route.