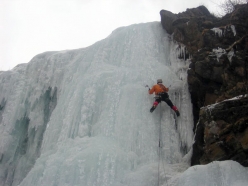 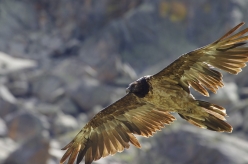 A temporary ice climbing ban has been enacted in Valnontey (Cogne, Italy) to protect nesting bearded vulture. The Gran Paradiso National Park commission and the Cogne mountain guides have produced a Decalogue aimed at protecting the local wildlife.

The icefalls in Valeille, Valnontey, Valsavarenche and in other places in Val di Cogne are all part of the Gran Paradiso National Park (PNGP). In the last few years, the ice climbing phenomenon, and other kinds of alpinism or outdoor sports, have become increasingly popular, attracting a growing number of sports lovers but also generating a lot of emerging problems for some components of the Park’s wildlife.

Therefore, the PNGP’s administration together with the Gran Paradiso mountain guides of Cogne have decided to promote an awareness raising campaign for the climbing community, with the aim of spreading knowledge and increasing respect for the vulnerabilities of the wildlife in this site.

The following decalogue suggests some rules for ice lovers, in hopes that they will accept and spread the list, in order to respect the Park and protect their own safety.

1. We’re climbing in a National Park: respect nature!
The Park's mission is to protect wild fauna and flora, preserving the natural environments. Help the Park with this goal by respecting every life form.

2. The Park has rules: let us respect them!
The icefalls are in a National Park which applies wildlife protection legislations defined by state law. Let’s look into the rules and laws before entering the Park.

3. Let’s inform ourselves about forbidden areas
It’s important to always be up to date with the areas where climbing is forbidden, because of raptor’s nesting or wintering zone.

4. Try to avoid bothering animals while climbing
You can reduce the disruption by avoiding excessive noise. The use of walkie-talkies could ensure that the vocal communications between members of a rope team don’t disturb the animals. Drones are strictly forbidden inside the Park.

5. It’s good to be responsible climbers
Ice climbing is an alpinistic activity and it’s not comparable to sport climbing. It’s important to consider our experience, our skills in moving on wild lands and to choose climbs suitable for our skill level. It’s a good habit to avoid excessive crowding on icefalls and to avoid dangerous behaviors between rope teams. Moreover, keep from walking on the cross-country trails.

7. Let’s catch up on conditions
Try to keep up to date on the icefall’s conditions and characteristics by visiting social media, guidebooks, mountain guides etc. Let us remember that the ice’s conditions are very variable and can change in a few hours.

8. Don’t underestimate the descent
Always be informed about the descent. It’s important to avoid causing trouble to other climbers during this phase of the trip and to not be caught by darkness. In the wintertime, days are short and night rescue operations can be more complicated and dangerous.

9. Safety and responsibility: avoid risks
A rescue operation, always granted if necessary, involves an important stress level for animals who live in the Park. Try to be extremely thoughtful in preventing any possible accidents; remember that climbers are responsible for their choices in the mountains. To phone the rescue team dial 112 or call on the radio frequency 161.300 MHz.

10. New lines
Because of the fragility of certain areas, before opening new routes or rebolting old ones, it’s recommended to ask permission to the PNGP office or to the local guides.